Electricity from the sun and water in French Guiana 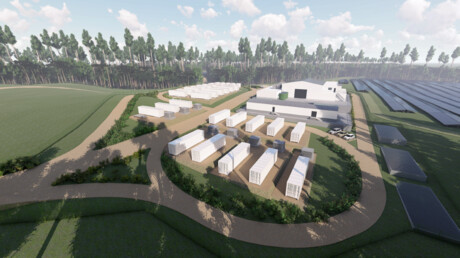 Investment company Meridiam and its partners Hydrogène de France (HDF) and SARA (Société Anonyme de la Raffinerie des Antilles, Groupe Rubis) are launching the construction of the West Guiana Power Plant (CEOG), said to be the world’s largest hydrogen power plant. This project, installed in the commune of Mana, is currently the largest power plant project in the world to store intermittent renewable energy using hydrogen (128 MWh of stored energy). According to the company, the plant demonstrates the future of renewable energies by eliminating their intermittency through storage on an industrial scale.

The plant is designed to produce 100% renewable electricity exclusively from the sun and water. It will provide year-round supply for the equivalent of 10,000 homes in Western Guyana at an estimated lower cost than the territory’s diesel plants. The plant is designed to provide electricity 24 hours a day, without interruption and without generating greenhouse gases, fine particles, noise or smoke. It is estimated to avoid the emission of 39,000 tons of CO2 per year compared to a thermal power plant. Operating autonomously, the plant will also secure the electricity supply of the Saint-Laurent-du-Maroni basin in case of failure or maintenance of the electrical network.

The electricity will be supplied by the combination of a photovoltaic park, long-term and robust energy storage in the form of hydrogen coupled with a short-term storage by batteries. It will be injected into the Guyanese electricity grid and its production will be governed by a 25-year capacity contract with French utility EDF.

The construction work was slated to start on 30 September and the commissioning is scheduled for April 2024. The project represents a total investment of €170 million and is expected to generate a turnover of around €17 million for local companies. During its 25 years of operation, the plant will create about 20 permanent and qualified jobs in Western Guyana, in addition to several dozen jobs created during its construction.

This project is a yet another illustration of Meridiam’s concrete initiatives to support ecological transition, as well as sustainable and resilient infrastructures over the long term. It will stimulate local economic activity through the establishment of a future industry and address multiple UN sustainable development goals, such as access to affordable clean energy, climate change mitigation, technological innovation and access to education.

Meridiam holds 60% of CEOG, SARA 30% and HDF 10%. French manufacturers McPhy and HDF will supply the electrolysers and fuel cells respectively. Siemens will be the manufacturer and operator of CEOG.