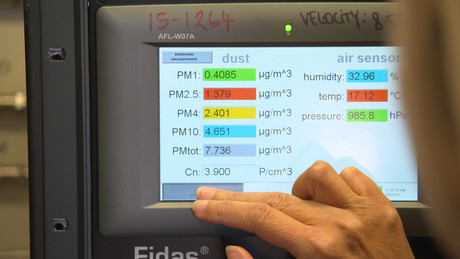 Researchers from CSIRO have completed the first comprehensive ambient air quality study in a CSG region of Australia.

Over the last three years, specialised instruments measured a wide range of pollutants such as carbon monoxide, nitrogen dioxide, ozone, particles and a range of volatile organic compounds (VOCs) in the atmosphere.

Since 2016 the data collected was streamed live to the Queensland Department of Environment and Science website (https://www.ehp.qld.gov.au/air/data/search.php).

Analysis of data revealed good ambient air quality within the Surat Basin area because pollutant levels were mostly within relevant air quality objectives for a wide range of pollutants.

“Overall, the air quality in the region is well within relevant air quality objectives for the majority of the time for a range of pollutants which are potentially emitted by CSG activities," CSIRO Senior Research Scientist Dr Sarah Lawson said. "However, CSG activities are a likely contributor to occasional coarse particle matter events similar to a range of other regional activities and sources which are typical of rural areas.”

Dr Lawson said concentrations of VOCs such as benzene, toluene and xylenes, commonly known as BTX, as well as formaldehyde and acetaldehyde were low and typical of other rural regions in Australia.

Chinchilla township site had the highest concentration of BTX and the source is likely to be mainly from vehicle exhaust, as well as domestic and commercial sources within the town.

“This study provides the largest contribution of air quality data for this region to date, and provides the community with important information about the levels and sources of air pollutants in a CSG region in Australia,” CSIRO Research Director Onshore Gas and GISERA Director Dr Damian Barrett said.

The purpose of GISERA is for CSIRO to provide quality-assured scientific research and information to communities living in gas development regions focusing on social and environmental topics. The governance structure for GISERA is designed to provide for and protect research independence and transparency of research outputs.