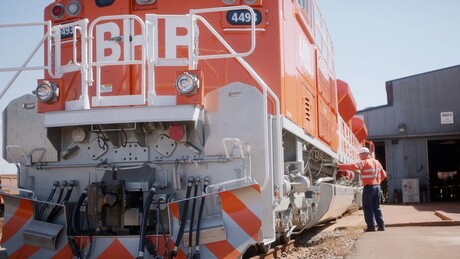 BHP has announced it will purchase four battery-electric locomotives and conduct trials at its Western Australia Iron Ore rail network, as part of the company’s ongoing efforts to reduce its operational emissions. The four locomotives are scheduled for delivery in late 2023. Two will be supplied by BHP’s current provider — Progress Rail, a Caterpillar company — and two from Wabtec.

BHP will test the battery-electric locomotives’ performance and emissions reduction capabilities in delivering iron ore from its Pilbara mines to the Port Hedland export facility. Conducting the trials in collaboration with two leading providers will support BHP’s planned electrification of its iron ore fleet of more than 180 locomotives.

The trials will also test ‘energy recapture’ opportunities using the rail network’s natural topography to further reduce the trains’ overall power demand. On the way to port, locomotives can capture energy from braking on downhill slopes (energy that would otherwise be lost) and use it to help power empty trains back to the Pilbara.

“WA Iron Ore is significant within BHP’s global operations, and I am pleased we can play a leading role in helping to develop new and innovative solutions with potential to shape our business for a cleaner future,” said Brandon Craig, BHP Asset President, Western Australia Iron Ore. “Rail is the fundamental link in our pit-to-port value chain, and the power required to deliver fully laden iron ore wagons from the Pilbara to Port Hedland is significant. Trialling battery-electric locomotives in collaboration with Progress Rail and Wabtec has great potential to support our operational emissions reductions targets and goals.”

“Replacing diesel-powered vehicles with electric technology is a key part of our plans to reduce operational emissions, as is partnering with a broad range of global equipment manufacturers and technology providers,” added BHP Group Procurement Officer James Agar. “By working with two global leaders in Progress Rail and Wabtec, we can broaden the scope of our trials and be better informed as we prepare for the planned replacement of our diesel-powered iron ore rail fleet. This is a good first step with significant potential.”

“We are excited to support BHP with our EMD Joule locomotives for deployment on its Pilbara railway,” said Progress Rail President and CEO Marty Haycraft. “Equipped with the latest technology, our eight-axle, 14.5 MWh battery-capacity locomotives provide optimal levels of energy regeneration and will play a pivotal role in helping BHP reach its sustainability goals.”

“The FLXdrive battery-electric locomotive represents the future of sustainable rail operations,” said Wabtec President of Freight Rogerio Mendonca. “The rail and mining industries are on the cusp of technological advancements to equip customers with zero-emission locomotive fleets. The FLXdrive is a major step toward eventually achieving that vision. It will provide BHP with the tractive effort, fuel savings, emissions reductions and reliability to cost-effectively run their rail operations.”