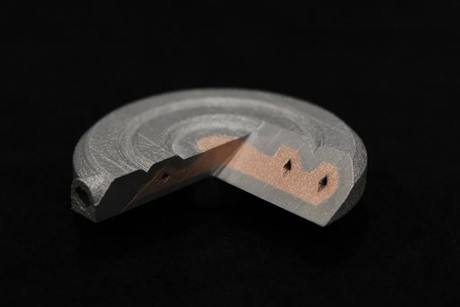 3DPrint.com has reported that Belgian start-up Aerosint has been the first to achieve multi-metal powder bed fusion (PBF). On 4 March the company announced that, after printing separate components made of 316L stainless steel and CuCrZr (copper chromium zirconium) in a single build, it had successfully 3D printed a single part made up of the two materials. The fact that this was accomplished using a metal PBF system is no small feat.

For some time, one of the major advantages that directed energy deposition (DED) had over metal powder bed fusion was the ability to deposit multiple metal materials in a single build. Because DED does not rely on the use of a powder bed — in which fine metal particles are spread across the print area with each successive layer using a recoating blade or roller — multi-metal 3D printing is a simpler task. Different metal feedstocks are simply introduced to the deposition head, which uses different parameters, such as temperature, to melt the material onto the workpiece.

Aerosint was founded in 2016 with the goal of making it possible to fuse different materials within a single polymer or metal PBF system. The key was the development of a system that could replace the recoating process described above. Aerosint set about creating a method for depositing small “voxels” of powder point by point using rotating drums. In contrast to the one-size-fits-all method of recoating found in other PBF printers, Aerosint is able to control powder placement in a three-dimensional fashion.

Aerosint partnered with Germany’s Aconity3D, whose machines would serve as the basis for Aerosint’s new powder deposition technology. The 316L-CuCrZr part shown in the picture was printed on Aconity’s Midi + L-PBF 3D printer. The part was 55 mm in diameter and 6.9 mm tall, specifically 174 layers of 40 microns each, and took about five hours and forty minutes to complete.

According to the news on the Aerosint website, the printer was designed by Aconity 3D so that Aerosint’s multi-material powder deposition technology could be integrated. The Aerosint recoater is today available as an extra option on the price list of the Aconity Midi+ printer.

“We feel this is a major breakthrough for 3D printing and are happy to have accomplished this with Aconity 3D,” said the news item on the Aerosint website. “Multi-metal printing gives designers and engineers the ultimate degree of freedom to make better parts. We are very proud of this accomplishment.

“No other technology is today capable of producing such dual-metal parts. Multi-metal Laser Powder Bed Fusion creates a range of new use cases and applications that we feel excited to explore together with our partners in the future.”

Aerosint is not limiting itself to metals alone. The company has already partnered with Solvay to perform multi-material polymer printing, as well as reduce the cost of selective laser sintering and print with high-temperature materials, like PEEK.