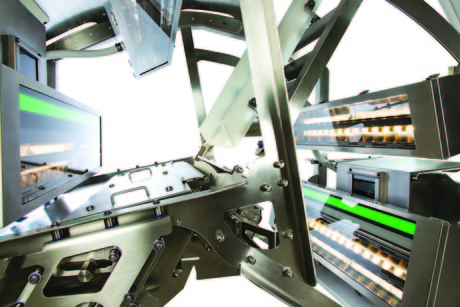 Bühler has received what is claimed to be the United Kingdom’s most prestigious innovation award — the Queen’s Award for Enterprise — for its optical sorting technology.

The Queen’s Award could be described as the UK’s ‘Innovation Oscar’ and is said to be the highest award for British businesses that have excelled in the fields of international trade, sustainable development or innovation. This is the seventh Queen’s Award Bühler UK has won since 1968.

This year’s win is in recognition of Bühler’s development of a camera technology used in sorting machines, capable of recognising the subtlest of colour and shading contrasts in materials and foods, thereby increasing detection rates for foreign materials, potential choke hazards or contaminated foods.

“This breakthrough technology will make the difference for us in the market for years to come,” said Johannes Wick, Bühler Group’s CEO for Grains & Food. “What is now in reach are applications to grade raw materials for composition and to remove invisible contaminations. This will be a major contribution to provide healthy and safe nutrition around the world.”

The technology is currently being used by food producers in Europe and the United States. They report an increase in detection rates of foreign materials by 10% — from 85% to 95%. A single Sortex optical sorter can control up to 150,000 single grains or 15,000 peas per second with a capacity of 12 tons per hour, securing higher food standards.

Bühler’s PolarVision uses camera technology that can detect even the most challenging foreign material in frozen vegetable production lines. Ardo, one of the world’s largest producers of fresh-frozen fruit, vegetables and herbs, has introduced PolarVision in its European sorting plants.

The Bühler camera technology is also being used to detect lower-grade or discoloured polymers to ensure the highest grade recyclate can be achieved by plastic recyclers. By detecting such high rates of contamination, it is now possible to produce food-grade plastic packaging from 100% recycled material, cutting the need for virgin plastic production and levels of plastic being sent to landfill.

One of the criteria for a Queen’s Award is that the technology should not just be innovative, but has to be scalable, commercially viable and to have resulted in a material improvement to a commercial process. Since the introduction of the Sortex E optical sorter using BioVision technology, sales of Bühler sorting solutions into the nut sector have doubled. The technology is now being used by some of the world’s top nut producers to detect blemished nuts along with the smallest shell fragments in walnuts, pecans and pistachios.