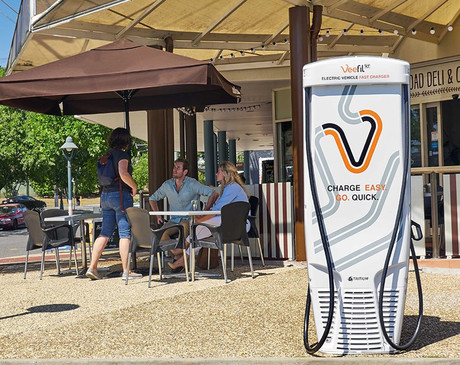 Australian success story Tritium was the result of success at the 1999 World Solar Challenge — a biennial race for solar-powered vehicles that crosses the Australian outback, covering 3000 km across the desert in around four days.

In the 1999 event, three undergraduate engineering students from the University of Queensland were competing, pitting the motor inverter they had developed on a shoestring against technology from some of the world’s premier car makers. A third-place finish in the gruelling event proved to the young engineers that they might just have a product upon which they could build a business. Two years later, David Finn, Paul Semia and James Kennedy took what they had learned from solar racing and formed Tritium, operating as a micro-business and selling the Gold Controller, the inverter product which was used in the SunShark.

At that time there were almost no commercially available electric vehicles. Most battery-powered vehicles were being built by hobbyists and dreamers. The controller was initially just selling to solar car teams, which are nearly all university teams worldwide, and so during the first few years, Tritium was a part-time venture, as Kennedy had a day job at another company, and his partners Finn and Semia were both pursuing PhDs.

Eventually, Kennedy quit his job to begin working for Tritium full time, and the company began building high-power inverters for individuals and small companies that were converting conventional cars into electric drive. But right from the beginning Tritium’s main markets were outside of Australia. They were selling 20–30 motor controllers a year, over 90% of them to overseas customers. As a result, they became good at remote service and support. That early experience at remote customer service was very helpful as the company began to grow.

Later, when the electric vehicle market started to take off, Tritium was able to adapt its technology to support vehicle charging.

“Although a motor controller and a fast charger appear to be two very different things, from an electronics view, they are very similar,” Kennedy said. “The motor controllers we did are three-phase motor drives — they take DC in from the battery pack and put out three-phase AC to run the motor.

“But they can run in reverse too,” he said. The fast charger that Tritium developed pulls three-phase AC from the utility grid and puts DC into the car’s battery. “The guts of our motor controller is the same as our fast charger. It is literally the same electronics, just running different software that makes it operate in a different mode.”

Tritium was timely and successful with its DC fast charger. It now has several thousand chargers deployed worldwide, all with 3G or 4G modems that allow data to be collected from each charger while enabling remote diagnostics and updates to be performed. As charging has gone from just a few kilowatts up to a hundred kilowatts or more, Tritium’s experience with high-power electronics has made it a significant player. “The higher the power, the more it has to be DC charging,” Kennedy said. “We are not using any on-board charging in the vehicles at those power levels, and we see higher and higher (charging) power levels as a key enabler of electric vehicles. With larger battery packs and longer ranges, we are looking at high-power charging with power levels up to 350 kW,” he said.

Tritium has since become a major supplier of fast chargers to US charging infrastructure company ChargePoint, a company that has predicted that it will have installed 2.5 million electric vehicle (EV) charges worldwide by 2025. ChargePoint currently has 50,000 total charging spots (892 of which are DC fast chargers) throughout North America and Canada, Europe, Australia and New Zealand, and Israel. So growth will be significant.

In Europe, the Ionity Network has chosen Tritium as its technology partner in the establishment of 100 high-power charging sites across Germany, France, UK, Norway and Sweden. IONITY is a joint venture of the BMW Group, Daimler AG, Ford Motor Company and the Volkswagen Group including Audi and Porsche. The dedicated electric EV charging stations will be capable of charging up to six vehicles, with each charger delivering 350 kW of power for fast charging of EVs. The chargers will be equipped with the Combined Charging System (CCS) used by an increasingly wide range of vehicle manufacturers. The initial 100 charging sites are part of a 400-site rollout by the Ionity Network.

The company also recently signed a deal to supply at least forty 50 kW DC fast chargers for the NRMA’s charging network rollout across New South Wales in Australia, and a separate deal to supply 12 units to NKM Mobilitas Ltd. (Mobiliti) in Hungary.

The majority of Tritium’s chargers are built at a plant in Brisbane, and a small number are built in the US. “We looked at manufacturing in China and, in fact, made a small batch there to evaluate it,” said Kennedy. “But in reality, the main cost in a charging system is the parts, not the labour, so manufacturing in a low-cost labour country doesn’t necessarily save us much money.”

This story is based on an interview article at Design News.