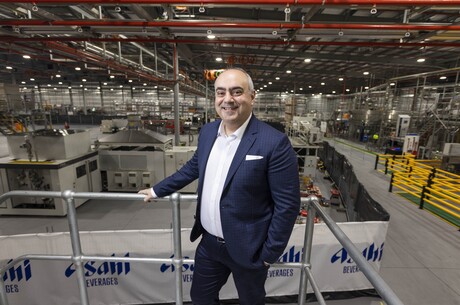 The plant will now produce 300 million litres of non-alcoholic beverages a year. Brands currently produced on the site are Schweppes, Solo and Pepsi Max; the upgrade will add others such as Cool Ridge water, Lipton Iced Tea and Pop Tops juice to its repertoire.

Two new bottling lines were added to the factory, along with a 39 m-tall warehouse to facilitate drinks being shipped around Australia. The plant will be operating 24/7.

“Our $55 million investment has created a world-class Queensland manufacturing site,” said Iervasi. “It has also nearly doubled the site’s annual production capacity to 300 million litres. It shows Asahi Beverages’ confidence in the long-term future of manufacturing in Australia and in Queensland specifically.

“Perhaps the upgrade’s most exciting part is the new hot-fill and blow-fill line, which will make Lipton Iced Tea and Pop Tops. The line’s innovative design means these drinks will be made without preservatives and using bottles inflated on-site from small pieces of preformed plastic. These are more sustainable than pre-inflated bottles because many more can be delivered to site per truckload — significantly reducing truck trips and carbon emissions.

“This will help Asahi Beverages reach its sustainability goal of reducing Scope 3 carbon emissions across its entire supply chain by 30% by 2030. Asahi Beverages will also reduce carbon emissions in its operations by 50% by 2025. This upgrade brings the number of quality full-time manufacturing jobs at Wulkuraka to around 130, with more than a dozen new full-time jobs created ... In addition to new jobs within the facility, more than 170 jobs were created during construction with dozens of Queensland companies involved.

“We are unbelievably proud of this new facility, the many Asahi employees who made it happen, and the jobs we provide in Wulkuraka and other parts of Queensland.”