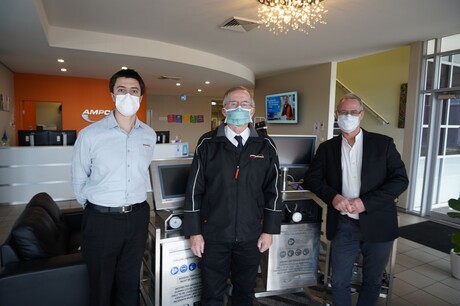 Ampcontrol engineers have been recognised for their contribution to innovation, industry and community at the Engineers Australia 2021 Engineer of the Year Awards.

Announced on Wednesday 22 September during an online ceremony, the Awards celebrate the talented innovators in the engineering field and acknowledge the problem-solvers who continue to design electrical solutions across the industry.

In 2021, Ampcontrol nominated three of its engineers, of which all were successful as finalists in the Newcastle Division.

“As Australia’s largest privately-owned electrical engineering company, we have over 250 talented people in engineering roles,” said Rod Henderson, Managing Director & CEO. “We value and celebrate excellence in what they do and their contribution to our business, community, and everyday life. Being recognised by Engineers Australia is a tremendous honour within our industry, and the acknowledgement of our people at the Engineer of the Year Awards is a very proud occasion.”

Thomas Steigler BEng MECH(Hons)/BEng MCHA(Hons) is a Research Engineer who joined Ampcontrol in 2018 while completing his Honours thesis in gas detection with Ampcontrol Electronics. Thomas has been a significant contributor to several high-profile projects at Ampcontrol. This includes working with Dr Ian Webster, Group Engineering Manager, leading the pneumatic system design, testing and manufacture of the emergency ICU ventilator in response to the COVID-19 pandemic.

Steigler and the team developed a bespoke test platform for the emerging ventilators, working within a highly compressed timeframe and faced with a wide range of constraints, such as supply chain uncertainty due to global disruptions and demand on medical equipment parts. Steigler was pivotal to the success of this development, taking on the broader scopes of electrical and mechanical aspects, and was the lead testing engineer in proving the Ventasys’ ventilator’s safety and success under the Emergency Exemptions established by the Therapeutic Goods Administration.

In September 2020, Steigler’s work focused on a collaborative partnership between Ampcontrol and Australian startup LAVO, to successfully produce a domestic hydrogen battery to pioneer the next generation of green energy storage for commercial and residential use. The LAVO Hydrogen Battery is the first residential hydrogen energy storage unit of its kind. His work on this project was novel, pioneering, technically challenging and rigorous; undertaking engineering challenges for which there was no prior knowledge.

Thomas Steigler, Ampcontrol Research Engineer, is thrilled to be acknowledged as recipient of the Young Professional Engineer of the Year Award, Newcastle Division.

“Winning the award is a great honour and a confidence boost moving forward into new challenges. I would like to be part of Ampcontrol’s future continued diversification,” he said. “There are so many exciting new opportunities right at our doorstep, and as a group we have the skills not to just take on new opportunities, but become a leader in the field, that others look to.”

Webster has held numerous leadership roles with national and international engineering bodies. He is presently the Lead National Technical Delegate to IEC TC31 MT60079-29 (Gas Detection), Chair Standards Australia EL-023 Electrical Equipment for Mines and Quarries, a member JASANZ ANZEx Advisory Committee and a NATA Technical Assessor. He is acknowledged as a subject matter expert in a number of technical fields of electrical engineering related to hazardous (explosive) atmospheres and underground mining, with 32 invited and peer-reviewed technical papers and conference presentations in the past five years alone.

Dr Webster has led several high-profile industrial projects, most recently the development of an ICU Emergency Ventilator, a project motivated by the COVID-19 pandemic, where Ampcontrol was invited to design and manufacture 600 ICU ventilators in 28 days to service a forecast shortfall in NSW hospitals. He led a team of clinicians, engineers and manufacturing staff to successfully demonstrate a working ventilator at the John Hunter Hospital in just 18 days. Ampcontrol was subsequently awarded a contract for design and supply of mid acuity ventilators for the NSW Government.

“It is an honour and a privilege for me to be recipient of this award,” Webster said. “Fundamentally, engineering is a collaborative effort and a collective achievement. The spectrum of the engineering profession will illuminate many individual and valuable contributions. For me, winning this award also recognises all the professionals that I have been fortunate to work with and hopefully to motivate and inspire.”

“These awards recognise and reward the outstanding achievements of engineers and help promote the important role they play in supporting our community, and our country,” she said. “Engineers will play a significant role in the plan to transform Newcastle to a smart, liveable and sustainable global city by 2030, and I congratulate our recipients for their important contribution.”

“We congratulate Richard, Ian and Thomas on their tremendous professional success, and we look forward to seeing their further development in advancing Ampcontrol’s emerging technologies into the future,” Rod Henderson added.