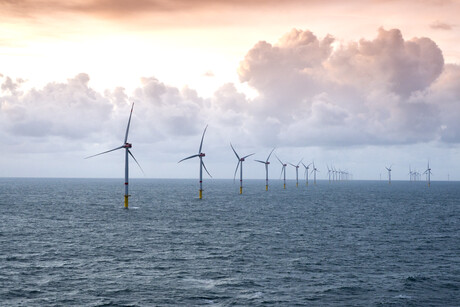 Alinta Energy has announced the potential for a 1000 MW wind farm to be established around 10 km off the coast of Portland, in south-western Victoria, that could supply the Portland Aluminium Smelter and east coast electricity grid.

The Spinifex Offshore Wind Farm would connect to the grid via the smelter and would make the site among Australia’s first smelters to be powered by up to 100% renewable energy. The company says that up to $4 billion of investment would generate new wind farm construction and operation jobs and help secure jobs at the site.

Kris Lynch, Alinta Energy’s Head of Project Development, said that the next steps would be conducting wind monitoring, site surveys and kicking off consultation in the new year.

“Existing data suggest Portland Bay has an excellent wind resource that would be suitable to power offshore wind turbines,” he said. “What we’re doing now is deploying monitoring equipment to ensure that’s also the case across the investigation area.

“The area we’re investigating is around 500 km2 and about 10 km from the shoreline, and the great thing about this proposal is that we can connect to the grid via the smelter and won’t need to build new powerlines on private land. We think the wind farm would need to be around 1000 MW to be viable.

“We also know the area has environmental, commercial and recreational uses and values that need to be thoroughly investigated and discussed, and we intend to kick off a more regular series of updates and discussions in the first half of 2022.

“We’re sharing the news at this early stage because we want to be able to speak openly with everyone as our initial investigations progress.”

The project specifics — for example, where turbines will go and how big they’ll be — are some way off and would be informed by environmental studies, the available technology and cost, site investigations, approvals processes, and consultation with the community and experts. 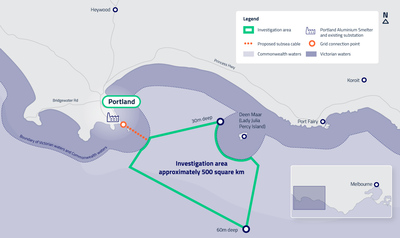 Portland Aluminium Smelter Manager Ron Jorgensen said the exciting proposal aligned with the aluminium industry’s direction to decarbonise. He said it also had the potential to further improve the long-term viability of the Portland smelter.

“This proposal offers an ability to make a step-change impact to Portland Aluminium’s carbon footprint and we welcome the opportunity to be involved in supporting the early-phase investigations of this exciting renewable project on the Australian energy landscape,” he said.

Anyone who wants to stay up to date on the proposal can visit www.spinifexoffshore.com.au.