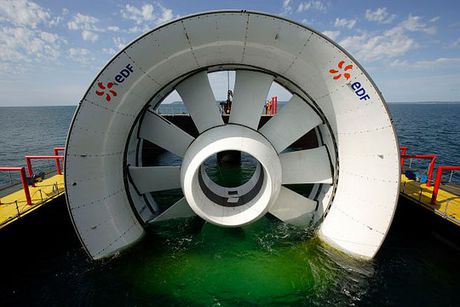 GE Power Conversion is helping build France’s first subsea tidal power plant for Electricité de France (EDF), near Paimpol-Brehat, in Brittany. When completed at the end of this year, it will generate 1 MW of renewable power and feed it through a 16 km underwater cable to the local grid.

“We went to the moon 46 years ago, and now we are using it to produce energy,” said Frederic Navarro, project director at GE Power Conversion in Belfort, France. “That’s because the moon’s gravity tugs on the ocean and produces predictable tides that run like clockwork, twice a day.”

As the tides move in and out, they will spin two turbines measuring 16 m in diameter and sitting 35 m below sea level. The turbines generate electricity with direct-drive permanent magnet generators and send it for processing to a subsea converter. Navarro calls it the “yellow submarine” because of the way it looks.

The idea might be simple, but the execution is a different matter. The turbines, made by OpenHydro, a company specialising in the design, manufacture and installation of marine turbines, are so large they have to be assembled in a dry dock in the port of Brest and deployed using a custom-built barge. In the dock, they will be coupled with the subsea converter, built by GE Power Conversion at GE Power & Water’s factory in Belfort.

Navarro said the subsea converter, which is 9 m long and 5 m wide, provides technology that will control the rotation of the turbines and optimise the power produced by the generators according to the speed of the tides. It can independently control the speed of each turbine, transform their variable AC voltages to DC and reduce losses along the 16 km subsea cable.

“Naturally, tidal arrays go to places where there are strong currents,” Navarro says. “But these currents also make such locations a tough place to work.”

OpenHydro will use specially trained divers to install the equipment at the sea bottom. “The divers will be only able to work during certain times of the day, when the conditions aren’t dangerous,” Navarro said. The partners expect the array to start producing power by the end of the year.

Among the technology employed to put the complex electrical design into action is GE’s MV3000 low-voltage drive. Together with other electrical components, it enables the low-voltage alternating current, generated by the turbines to be transformed into HVDC, significantly reducing energy loss over a long-distance power transmission.

The onshore substation will use a GE MV7000 drive that converts HVDC back to HVAC, which is compatible with the French grid.

A drawing of EDF’s tidal array off the coast of Brittany. (Source: EDF)

Being among the first projects of its kind, it was up to GE Power Conversion to conceptualise, assemble and test the highly advanced subsea converter, drawing from its expertise in marine and subsea projects.

“Reliability is of the utmost importance in this project; once the equipment is installed on the seabed it has to run in full autonomy for a minimum of five years,” said Régis Baudet, project manager, EDF. “We have full confidence in GE Power Conversion to design and build a reliable and robust system that will allow continuous power generation and other operation requirements.”