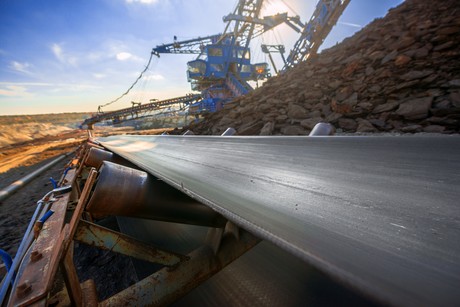 The CSIRO’s resourceful magazine reports that a new Australian designed and distributed acoustic sensing system — AURA IQ — is changing the way mines manage conveyor belt maintenance. AURA IQ is designed to be much safer, more accurate and more efficient than conventional monitoring methods, and could save mining companies millions of dollars.

Maintaining conveyor belts in mines is a significant problem, with conventional monitoring methods unreliable, time-consuming, labour-intensive, costly — and often hazardous, according to the article.

According to the AVA Group's group head of innovation for extractives and energy, Andrew Hames, the greatest maintenance burden for conveyor fitters is detecting and replacing worn rollers.

"Even a small width belt contains 2500 rollers per kilometre, and there are two bearings in each roller. A mine with 60 kilometres of conveyors can replace up to 40 rollers per day," he said.

Mining3's data acoustics systems leader, Paul Wilson, explained that some mines employ up to eight staff to walk up and down belts three or four times a day to identify wear. The tools they rely on — their hearing, infrared cameras or microphones — are flawed, because human hearing is unreliable, worn bearings don't always emit heat and microphones pick up too much background noise or staff move too quickly to collect useful sounds.

Staff also face hazardous conditions and often can't access many sections of conveyor belts, which cross natural obstacles and rise on gantries to fill surge bins. In addition, bad weather can make it virtually impossible to walk the belts.

"Mine operators had no way of detecting bearings, so either replaced them too early which was expensive, or they'd collapse and cause damage, and that also becomes very costly," Dr Wilson said.

The system transmits a series of short laser pulses along a single fibre-optic cable retrofitted along the length of a conveyor. When bearings wear, they vibrate. Vibrations travel through the conveyor's frame and onto the cable, causing microscopic changes in the backscattered laser light.

Data from these changes is simultaneously gathered from every metre of the conveyor, and AURA IQ processes this data and alerts operators, on- or off-site, about potential failures. The data collected can detect a broken ball or cracked cage in a ball race, observe and track idler bearings as they wear, and predict bearing seizures.

"The Aura IQ Cloud and network solution wirelessly connects the IQ Edge Server to a central cloud reporting and analysis platform," Hames said. "Alerts and reports from conveyor assets — located anywhere in the world — are accessible on any internet-enabled device in near real time, without the need for specialist software or equipment."

The research behind differentiating sounds and categorising them into the different stages of a bearing's lifecycle is brand new, and as Dr Wilson tells us, it's game changing.

"This is a radical idea. We've completely changed how we monitor the signals from bearings," Wilson said.

And because fewer staff are needed for belt walks, their time and labour can be focused elsewhere. Dr Wilson believes this will improve overall mine performance.

APN Partners undergo AWS technical validation and assessment of the security, performance and...

The cybersecurity industry is constantly changing. Threats and attackers are becoming more...