The road from automation to autonomous systems 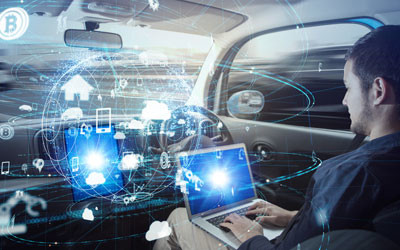 Data is often referred to as the oil of the digital economy; but in the context of the Fourth Industrial Revolution, self-learning algorithms for autonomous engineering, operation and control are likely to be the key to success.

Everybody is talking about autonomous cars. Indeed, the progress this technology has made during the last few years is so impressive that it’s way ahead of what is happening in the field of industrial automation. So, to better understand what is going on, it is instructive to look at how the automotive industry defines the five levels of autonomous driving in the context of today’s industrial automation systems (see Figure 1).

This is where we are today: where a human controls it all. In the context of industrial automation, level zero is how operators run their plants during the start-up phase, and when they configure and optimise processes.

According to the US National Highway Traffic Safety Administration (NHTSA), this level is characterised by “an advanced driver assistance system (ADAS) … that can sometimes assist the human driver with either steering or braking/accelerating, but not both simultaneously”.1

In the context of industrial automation, this is replicated by control loops that keep particular process variables at set points based on feedback from sensors.

Having examined the autonomy levels of self-driving cars, we now need to consider at least three views of industrial autonomous systems (Figure 2).

Figure 2: Levels to which autonomy has been achieved in industry.

Most discussions of autonomous systems centre on autonomous operation. However, a pre­condition for autonomous operation is autonomous engineering. Using the vision of the Fourth Industrial Revolution as a guide, the development of industrial automation can be interpreted as parallel to the five levels of autonomous driving. Considering the production and optimisation of smartphones, for instance, these devices are characterised by hundreds of configuration parameters designed to allow users to customise their communication experiences. However, although more than 90% of all settings are kept at default values, some users take the time to tweak their devices and applications for optimal performance. And in those cases where the tweaks can be shared with the supplier, the information can be used to improve the product, reduce troubleshooting costs and optimise default parameters.

A further step could be a scenario in which all smartphones can upload their improved configurations into a vast data lake that would be available to all. By the same token, today’s industrial automation technology already connects millions of devices. This, along with the knowledge of how devices associate with each other, in which industrial applications and under which environmental conditions, is the foundation for autonomous engineering.

Using the capabilities of big data analytics, one can derive device and application settings that are much better than the default settings. The data model continuously refines the settings. For guidance similar to that provided by an advanced driver assistance system, engineers can then either choose default parameters given by the product owner or the settings most of the engineers around the globe have chosen in a similar set-up for a similar application in a comparable environment. This combination of human and machine resources would move autonomous engineering from level one to two. Once this becomes mature, it would allow moving to level three, where a plant could autonomously change its configuration, for instance based on environmental changes between summer and winter. This is the reason why autonomous engineering is to some extent a precondition for autonomous operation.

Today’s plant operation technology has reached a level of autonomy somewhere between levels 2 and 3. But it will take much more than just autonomous engineering to reach full autonomy. To achieve this, systems will have to combine device and application settings, as well as process values. A good starting point is an analysis of data from decades’ worth of alarms and events that tell operators how production systems have performed under a vast range of conditions.

It must, however, be kept in mind that human error is still the main cause for production failures and plant shutdown.2 In view of this, the availability of plant-wide data is obviously at the core of autonomous operation and is a prerequisite for unlocking the potential of today’s technology and data analytics. Machine learning, with its unlimited storage and computational power, allows us for the first time to take advantage of this. But to become fully autonomous, such a system must be able to automatically change a configuration if it detects a novel fault situation — in other words, it must be able to go beyond what it has learned from a vast data set of previous situations and be capable of triggering and configuring new alarms by itself and reacting to them. This new setting is far more complex than anything engineers have configured to date. Here, data is the beginning of autonomous operation, while self-learning algorithms lead to the next level of autonomy.

In coming years artificial intelligence will change today’s control paradigm from signal marshalling to process data analytics, from feedback loops to prediction, and from process calibration to self-optimisation (Figure 4). AI-based systems will also soon be far better than traditional control loop systems because machine learning can correlate hundreds and thousands of parameters instead of just comparing a variable with a set point. In order to take advantage of this, the next level of autonomous control will have to holistically address entire industrial automation systems. This will call for feeding all engineering data, device parameters and their operations, as well as process and environmental data, into a machine learning-based system and training it based on physics, feedback from the quality assurance system, and the experience of operators and plant engineers. Once these steps have been taken, control loops will no longer be needed to determine process input parameters for devices. Device-wise this will initially cause a disruptive transition because industrial automation devices in the installed base are not capable of hosting machine-learning engines; but it can be expected that the next generation of industrial devices will be much more powerful.

Market-wise, the good news is that this transition will be relatively slow because of the enormous size of the installed base, thus giving users time to implement and familiarise themselves with new systems.

Successful players will need to be agile and fast in terms of service development. They will accomplish this by limiting the role of proprietary hardware to a minimum and shifting their focus to cloud-based software-as-a-service (SaaS) solutions. Finally, they will need to transition to control systems that are based on architectures and designs built from the ground up with autonomy in mind. The architecture and design of tomorrow’s autonomous industrial systems will have to support autonomous engineering, operation and control.

To accomplish this, future autonomous control systems will have to start bottom-up because the control layer and the underlying field layer provide the process- and device-specific data for data analytics and new AI-based solutions. Starting from the control layer also explains why it cannot be an extension of today’s hardware because today’s industrial controllers lack the power to compute, or the memory to run, additional analytics or AI processes. Nevertheless, the first step will obviously be to maintain today’s software while migrating it to a more powerful platform — such as a virtual controller running in a cloud environment.

Starting with the architecture from a virtual controller (Figure 5) solves many requirements on the way to fast and agile data analytics, AI-based solutions and autonomous systems. Firstly, all data will be easily accessible for data analytics and AI micro-service applications within the same cloud environment. Secondly, unlimited computational power and memory can enhance the control software with new features and interfaces. And finally, new features can be quickly deployed within the cloud and do not require any hardware changes or extensions, thus maximising speed and agility.

Autonomous control will take time to realise and will call for many intermediate steps. While it is certainly a challenge, it is attainable with a stepwise approach. The key to agility and speed is to change the mindset from a transactional product business to software-as-a-service and minimise the development of proprietary hardware. The key to success is two-fold: on the technology side development must start from a base architecture built on a vision of autonomy; on the business side, an early and stepwise business model must be created in which this new development adds to the top line while the existing business continues.

Python and machine learning are incredible tools for IA

Python is now increasingly being used in the industrial automation and embedded systems world.