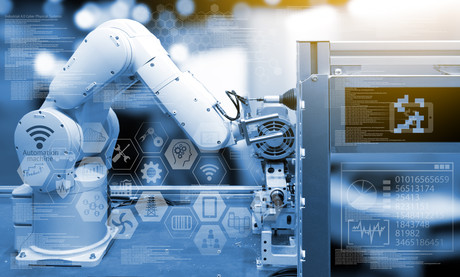 The industrial world is transforming with the rise of Smart Industry. Modern production machines and handling equipment have become highly integrated mechatronic systems with a considerable portion of embedded software.

The growing abundance of data is a key driver for Smart Industry. Power plants, production machines, electric and hydraulic drives, and vision sensors all gather an increasing amount of measured data during production operation. This data can be turned into business value by developing predictive models and algorithms. For instance, machine learning can train a model to understand historical sensor data, so that the model can be used to create systems to predict future equipment failures and prevent production downtimes.

But one major design question in implementing such systems is: where should the model be deployed? Should it run on the machine itself, so that decisions can be made in real time on the attached PLC or industrial PC? Or should it be in business IT systems, possibly located on off-site servers, or in the cloud, where computational power is readily available and models can be easily updated? Each approach has its positives and negatives, and the answer depends on several elements.

Quite often, one of the first locations considered for predictive models is business IT systems. Model maintenance is straightforward and, should a better model be discovered, it is an easier task to update a model in this system than it is to update models in embedded systems. As a result, models can be continuously researched and improved as more data becomes available.

To integrate predictive models with such systems, you need tools for integrating with a range of programming languages and APIs. Programming languages such as Java, .NET, C++ and Visual Basic are often used to implement business systems. Common data transfer methods include RESTful APIs and JSON. The generated predictive models must be able to integrate into these environments to avoid the costly and inefficient process of recoding models.

Response times are faster when implementing predictive models in embedded systems, as data does not have to be transmitted over a network and back, and they are deterministic, running on a real-time system. In controls applications, where the result of the predictive model is used to calculate the next actions taken by the machine, this is especially important.

Implementing predictive models on equipment is part of a bigger trend toward raising the complexity and size of the code base on production machinery. However, many machine builders are mechanically focused and must maintain experience with workflows and toolchains for mechanical construction. With regard to software design, machine builders rely on traditional methods for programming and testing on hardware. This tends to be time-consuming and error-prone with the increasing complexity of the algorithms used in machinery. Manually implemented functions that have already been verified through simulations do not always behave the way they were intended to, may contain errors and can cause missed deadlines and problems that are only noticed on-site.

The design productivity and system reliability of such an approach can be improved by using model-based design tools. Such tools facilitate modular development of automation components, hardware-independent testing and automatic code generation, which can implement algorithms for specific-hardware platforms with ease. Real-time functionality is directly generated from simulation models using automatic code generation — thus avoiding sources of errors. The tested algorithm is directly translated into real-time code, saving time. Model-based design with automatic code generation lets engineers fully leverage their expertise in construction to build a machine or plant, minus the concerns about programming language details.

In the future, engineers will need new methods and tools to overcome an ever-increasing amount of data and the growing complexity of software. In the meantime, industrial companies who can move their focus towards interdisciplinary design thinking (instead of production thinking) will rise out of the transformation with new business models for their market and as true innovative leaders.

As Industry Manager for the industrial automation and machinery field at MathWorks, Philipp Wallner is responsible for driving the business development of this industry segment that comprises energy production, automation components and production machines. Prior to joining MathWorks, Philipp worked in the machine builder industry, where he held different engineering and management positions.

The benefits of investing in predictive maintenance are too great to ignore, but it is not...

Digital transformation and data analytics in the process industries

The industrial world is changing, and it is driven by the application of digital technologies.

Achieving digital transformation includes activities that align manufacturing and IT systems to...