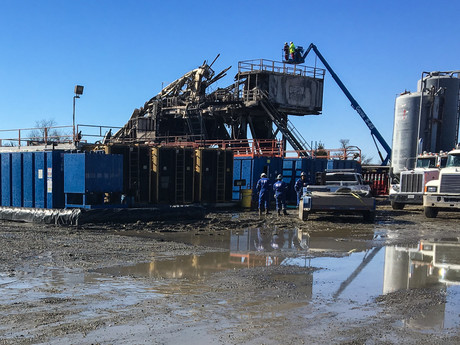 Oklahoma-based news service Tulsa World has reported that on 12 July the US Chemical Hazard and Safety Board will release its full investigation into an oil well blowout that killed five workers on 22 January 2018.

The explosion at the onshore drilling site near the town of Quinton — 160 km south of Tulsa, and operated by Oklahoma City-based Red Mountain Energy — was the result of a range of operational and safety management problems, according to the investigators. The report will show key findings:

A Chemical Safety Board investigation update in August noted that “strong indications” of a hazardous influx of gas existed at least a half hour before the explosion. And an indicator of conditions conducive to a blowout showed a level 10 to 20 times greater than general industry standards that would trigger alarms, the agency’s lead investigator stated.

The remains of the five workers who died were found in a room where drilling operations take place on the derrick. A sixth worker was injured while trying to close the blowout preventer before escaping by sliding down a guy-wire.

Other highlights of the Chemical Safety Board’s overview of its final findings include:

Industry standards exist, but a Chemical Safety Board report from 2014 noted that “serious incidents continue to occur”, suggestive that the industry’s “voluntary guidance is insufficient”.

The flawed cabin design finding may be related to an Occupational Safety and Health Administration determination that an emergency descent device had gone uninspected and was inoperable. A lawsuit also claims that the cabin — or “doghouse” — configuration would have forced each man to be exposed to the inferno and exit one at a time.

ABB awarded $24 million contract to provide mine hoist systems to increase production at...

Efficient and secure: how data management of the future supports safer work practices