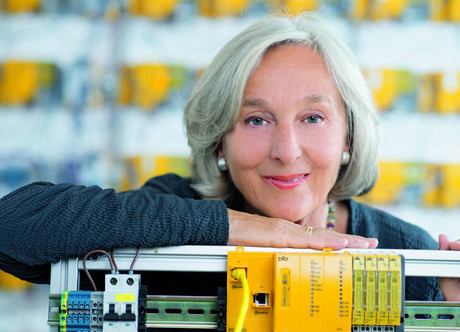 70-year-old German engineering company Pilz GmbH is getting set to pass the baton as it announces the retirement of Mrs Renate Pilz, who has been the driving force behind the growth of this successful German business. Mrs Pilz is set to visit Australia next week and affirms the Australian business has the potential to be a local powerhouse of engineering.

Pilz Australia is headquartered in Melbourne with offices in Sydney, Brisbane and Auckland, providing sales and logistics, along with turnkey engineering projects, to the local market. Pilz Australia forms part of the Asia Pacific region for Pilz where it has high expectations for growth, in line with business doubling in five years to nearly AU$100 million, accounting for 20% of company revenue.

Australia was part of the company’s first foray outside Europe in 1998 when subsidiaries launched in Australia, Brazil and Japan, with Australia seen as a forerunner into the Asia Pacific market. Australia has a safety culture that matches Europe’s – in particular Germany, which leads the world in safety products and services.

Pilz Australia Managing Director Scott Moffat said, “Given the relatively small size of the local market compared to Pilz’s 40 sister companies worldwide, we are a good test market to champion new products throughout the region. In particular, it is our strong safety culture and lead in industries such as mining, oil and gas, medical, research and defence. We learn how to do it on the ground here and leverage that into countries with similar markets and applications globally.

“As our great skill is know-how and a workforce developed to collaborate with our sister companies, we are the perfect training factory.”

Pilz came to worldwide acclaim as the pioneer of the Emergency Stop (that red button you see on machinery everywhere). Today this button is integral to everyday safety — from baggage handling and packaging equipment through to the process lines in manufacturing and automotive factories. There is a lot of technology behind what looks like a very simple button as it has to reliably operate every time as every time is an emergency.

The button relies on the smart technology pioneered by Pilz and contained largely within its safety relays and configurable safety controllers; the yellow box used to control everything related to safety on machinery from simple guard-switches on a woodworking machine to emergency shutdown sequences on nuclear reactors, known colloquially as the Pilz relay.

Pilz is the quintessential German “Mittelstand” company, which like so many German words doesn’t translate. It’s an ethos, often cited as the miracle of the German economy.

The character of Mittelstand is a perfect fit for the Australian economy, which, like Germany, shares a dependence on the success of small-to-medium enterprises to power the economy. The German Mittelstand philosophy is a hereditary DNA which carries into the products and services it produces. Typically, these companies are heavily focused in niche markets producing highly superior products that are either number one or two in their markets and taking them to the world.

Herman Pilz founded Pilz GmbH in 1948 and its international growth and innovative trajectory is based posthumously on his son, Peter Pilz, who was killed in a plane crash in 1975. His legacy is the driving force behind the company, where 40 years later his vision for safety automation is just as prevalent today. When the team gathers to talk of innovation, new products or services, it is guided by one single ethos: “What would Peter think?”

Picking up the reins at the time was his wife, and mother of his two small children — Renate Pilz. She had not studied and she had no technical or economic knowledge, let alone a clear concept of automation technology.

“Nonetheless, against the advice of my confidants, I decided not to sell the company, out of a sense of duty,” said Mrs Pilz.

Initially, she limited her involvement to chairing the company’s advisory board and used her child-rearing years as a period of intense learning, before taking full control of the company in 1994.

Mrs Pilz has visited down under on occasion: in 1998 for the opening of the company, which coincided with the 50-year anniversary. Her philosophy is firmly that each region is autonomously run as a “Schwestergessellschaft” — the German word that describes a sister company that is independent and autonomous.

Now, Mrs Pilz is visiting Australia again to announce her retirement and hand over the reins to her son, Thomas, and daughter, Susanne.

Renate Pilz remembers well the day her husband showed her a safety relay for the first time. She told him not to even start explaining it to her as automation was a complete mystery. Since then, she has committed herself to learning everything there is to know, and speaks fluently about automation and safety.

Mrs Pilz says that was not the most challenging part of her career. “Like anything, you can apply yourself diligently and you will learn it,” she said. “I have had no technical training — but I made it my mission to educate myself in this industry and surround myself with a supportive and instructive team.

“When I stepped into my husband’s shoes in 1975 I had two small children. My friends were all housewives and mothers so they were quite surprised at what I was doing. That was a different era and it was very unusual for a woman to head a company, let alone a technical engineering business in Germany’s southwest region of Swabia.

“Now I have been in the business so long — over 40 years — I don’t know any other life. It is wonderful to be independent: you are the author of your success.

“By far the most challenging time was the global financial crash in 2008. It was not something we anticipated and it felt like we were being buffeted in a storm. We fought hard in every direction, especially with the banks. Our priority was to secure everyone’s jobs worldwide — which we did.

“Globalisation is a concept we struggle with,” she added. “The challenges balance themselves out, an international marketplace is exciting and we just look forward to what the next day will bring.”

Industry 4.0 is the future

Pilz reinvests nearly 20% of revenues a year on research and development to capture the future, including a large focus on Industry 4.0, the new cyber-physical world of manufacturing systems and creating the digital factory of the future –— often called a ‘smart factory’, where machines communicate and think for themselves. This sees devices communicate in real time, connected to big data, thinking for themselves.

The company’s research and development program sets it on a growth trajectory and Mrs Pilz steps down knowing the future will be both successful and exciting.

“The advice I have for any person in business is the same as I give to my son and daughter who are taking over the reins,” added Pilz. “Put you whole heart into what you do and commit to the customer, without customers we do not have a business.

“Once I retire I’m looking forward to some quiet time gardening and enjoying my family.”

Experience has shown that in many companies, management teams have little or no understanding of...

ABB awarded $24 million contract to provide mine hoist systems to increase production at...

Thermal protection — The final authority in the safety chain

The chicken or the egg? The box or the PCB?