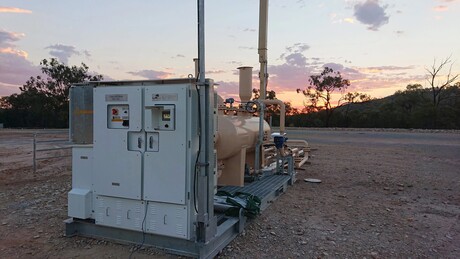 Santos is one of the leading independent oil and gas producers in the Asia–Pacific region, supplying the energy needs of homes, businesses and major industries across Australia and Asia. With a large resource base in Queensland and growing demand for LNG in Asia, Santos created the GLNG project in 2007. This pioneering project was to convert natural gas, including coal seam gas from the Bowen and Surat Basins, into LNG for export to Asia.

The project involved the development of gas fields, the construction of a 420 km underground gas transmission pipeline to Gladstone and a two-train liquefaction and storage facility with a nameplate capacity of 7.8 mtpa on Curtis Island in Gladstone.

To assist in futureproofing LNG production, Santos decided to update the standard wellhead design for new wells with an advanced control and automation technology platform.

Progressing cavity pump (PCP) and linear rod pump (LRP) wellhead skids are critical parts of the LNG production process. Their main components include a separator and motor control centre. To improve the next generation of new wellhead skids, Santos called on its longstanding relationship with ATSYS, a Rockwell Automation Recognised System Integrator. Having an accomplished background and expertise in this area, ATSYS produced a wellhead control and monitoring solution for the project with consideration of the arduous environment in which the equipment must operate.

ATSYS was tasked with designing a system that not only improved reliability but would also have the functionality to implement new innovations from Santos on the open system. This would improve the functionality over and above what the previous system could do.

In deciding which technology would provide the best solution for the wellhead skids, ATSYS went through a process exploring a number of options.

“After investigating a number of options, we found that the Rockwell Automation Integrated Architecture solution provided the best performance because it allowed very fast communications between the PLC and the drive, which was critical to this application,” explained Andre Tassone, managing director, ATSYS.

A pilot project was conducted and field tested using this solution for both PCP and LRP wells, and as a result of its success, Santos moved forward with the mass rollout of the new design, which involves approximately 400 wellhead skids per year.

The new system was designed around efficient commissioning. Commissioning of the old system took days and now just takes hours per wellhead. The systems are built and tested off-site utilising automatic PLC and drive set-up via SD cards. The skids arrive onsite already configured and tested, meaning commissioning is a seamless process.

The speed of communications between the Allen‑Bradley CompactLogix controllers and PowerFlex 753 drives allows for very precise real-time measurements of torque and position of the pumps. “While the pump is operating, we need a high-speed sampling rate to ensure the accuracy of the dynacards,” said Alex Gibson, principal control systems engineer, ATSYS. “The dynacard plots the pump load against position, allowing us to perform some advanced control functions. The high-speed communications and processing power of the Rockwell Automation system provided the capability to use a PLC instead of an RTU for this application when a lot of people in the industry thought this would not be possible. It provided maximum flexibility and the ability to perform AGA3 gas flow calculations in this complex control application.”

Given the remote location of the sites, having access to diagnostic information was a key requirement for the project to avoid people having to go to site unnecessarily. There are diagnostic features built into the system using analog I/O with HART connectivity from Spectrum Controls. The new system provides improved reliability, simplified set-up and commissioning, fast fault diagnosis and the simplicity of a single standardised design for multiple wells.

“The Rockwell Automation Integrated Architecture solution is flexible, scalable and futureproof to allow for additional innovations. It provides a technology platform for Santos to not only meet today’s requirements but to also expand the future possibilities of gas production,” Tassone said.

The collaboration between Santos, ATSYS and Rockwell Automation has been a key component of this project.

“The project teams and engineers from all companies involved were able to work together to effectively solve complex problems which culminated in the ongoing success of this project,” concluded Greg Schultz, channel account manager, Rockwell Automation.

The VEGAMET series of level and pressure controllers are designed for water and wastewater...

Smart water solutions contribute to low-carbon agenda in the Hunter