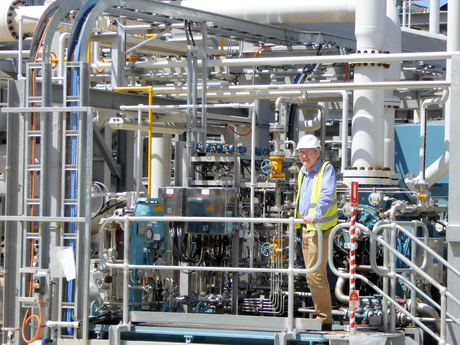 The challenge for the Qenos operators has been to ensure a constant supply of high-consistency ethylene to their customers while managing a fluctuating ethane feed.

Also, as the plant ages, the technical personnel need to continuously update the control system model (the heart of model-based control) without activating a plant retest and incurring unnecessary costs.

It follows that optimising the control system models requires an intelligent and reliable solution. The Qenos Olefins ethane to ethylene conversion plant at Altona recently upgraded its advanced process control (APC) system to adaptive process control. The decision has had a positive impact, beyond their expectations, on efficiency, throughput and operator engagement.

According to process engineering and control team leader Richard Wawrzon, “Our Senior Control Engineer has used ‘calibrate’ mode on a couple of occasions to tune up problem models with great success. Most interestingly, it ran in ‘calibrate’ for a number of days on a large fractionator without operators noticing any operational differences, during a time when the engineer was only able to supervise the test remotely. In our specialised world, this does feel like a game changer as a similar exercise prior to this would have been very intrusive to our operations department and costly to all the stakeholders.”

Jenny Clemow, senior process controls Engineer at Qenos, added: “The ethane to ethylene conversion process can be simplified into four steps - crack it, compress it, chill it and separate it - with product ‘cleaning’ taking place at each step.”

Ethane enters the furnaces where the gas is ‘cracked’ into simpler molecules, the by-products are then quenched and compressed, chilled by the refrigeration circuit, separated in the fractionators and finally distributed to the customers as ethylene.

Qenos sources ethane from natural gas suppliers operating in the Bass Strait. The primary interest of these suppliers is to feed natural gas into the national gas grid, based on consumer demand and price offered. Both demand and price vary significantly during the seasons - hot weather reduces usage and crude oil price impacts gas prices. The knock-on effect is that the ethane supply fluctuates dramatically week to week, month to month and season to season.

Ensuring a reliable supply of ethylene to their clients, with a varying ethane feed, has been the biggest challenge since inception.

The need for advanced control

To help manage this complex supply and demand situation, Qenos implemented AspenTech’s DMCplus Advanced Process Control (APC) system, with subsequent updates and revisions, some 20 years ago. Since that time, they have fine-tuned their APC control models as far as is possible and they consistently perform at a service factor (time spent with APC as a percentage of total time) better than 90%.

Why the upgrade to adaptive process control?

What was recognised fairly early on was that conventional APC does not address changes to the operating environment and process unit, and as time passes, the APC model becomes less and less reflective of the current plant dynamics. The consequence is that the control system becomes progressively less effective, and with the service factor dropping as operators turn off the APC, the process tends to operate outside the tested region, resulting in potential control instability.

Richard Wawrzon at the base of a refrigeration circuit.

As the plant ages and undergoes wear and tear and fouling, problems such as fouling exchangers, rewheeling of compressors, valve replacement, measurement instrumentation recalibration, etc, can cause the plant to run outside the constraints of the model. Over time the plant-model mismatch can increase significantly.

Another factor that can result in the plant-model mismatch is the fact that the process is non-linear, and the need to change the operating conditions to meet new production specifications, as dictated by management, can move the plant to an operating position where the process dynamics are noticeably different from the model.

To overcome the limitations of traditional APC, Qenos implemented AspenTech’s DMC3 Adaptive Process Control solution in 2014. In the background, Adaptive Control continuously runs small step changes to critical process variables, monitoring the impact on other dependent variables, and then suggests a revised model when the results have converged. Simultaneously, DMC3 actively controls the unit and drives it towards an optimal operating point.

Effectively, adaptive process control is continuously fine-tuning the model as the plant ages, allowing the service ratio to head towards 100%, and ensuring that the plant is running at its optimum performance. The adaptive functionality can very easily be deactivated by the operators when they anticipate major process changes.

According to Clemow, “Adaptive control has allowed us to optimise the plant performance holistically, but a major benefit has been the ease of upgrading parts of the model as areas of the plant age, or we make our own changes to certain processes.”

Before the upgrade the team had identified a target application on the plant that they wanted to remodel - in this case a demethaniser.

“The implementation was similar in scope and complexity to a normal APC version upgrade and was seamless and trouble-free,” commented Clemow.

The engineers had received a couple of days of training with an AspenTech specialist but were not able to use the data that was collected during the training because the plant was not in a regime that was ideal. Due to their supply inconsistency, it is not always possible to schedule training when the plant conditions are perfect. Clemow personally ran the test a month later and experienced no difficulties or surprises.

The Qenos operators did not require a lot of training because the system and display panels appeared the same as before the upgrade. Unless they had looked super closely, they would not have detected the step-tests the adaptive process control was running in the background. Clemow did spend some time with them at the operator panels, and then she monitored the test remotely.

One of the metrics Clemow tracks is an ‘accumulated prediction error’ that records the prediction errors of what the model anticipates is going to happen, compared to what actually does happen. If her team observes a trend or a shift in one or more predicted errors, this is an indication that something is wrong with the model.

“Historically, I recorded these errors in a data historian and tracked the trend until it became necessary to alter the model,” said Clemow. “Adaptive control is doing the same thing - but in a far more elegant way.”

The DMC3 adaptive process control upgrade has reduced much of the tedious workflow by automating the mundane control tasks, and that frees up the engineers and operators to manage the higher level challenges. Traditional plant testing is very disruptive and adaptive control has significantly reduced the need for plant retesting, which is beneficial for everyone.

Richard Wawrzon concluded, “Today, adaptive process control identifies the model changes that need to be made, but it is still up to the engineers to implement them when the plant is in a suitable operating condition. Going forward, I anticipate that the adaptive control will be able to select the ideal operating period to make the changes and then do it. But, what we have today, has benefited all aspects of the plant - efficiency, throughput, service factor and operators - and is exceeding our expectations.”