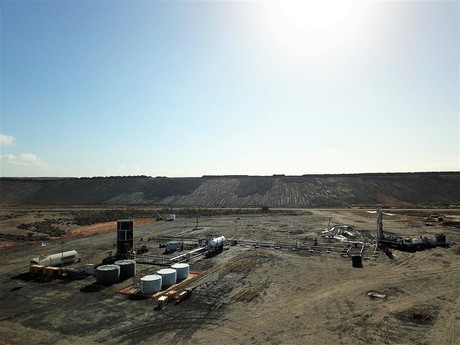 LCEP is an in situ gasification (ISG) project converting coal from its solid state into its gaseous form. This process results in the generation of synthetic natural gas (syngas) containing methane, hydrogen and other valuable components. The syngas can be either used to produce electricity directly or further refined into a variety of products including synthetic methane and ammonia.

To obtain information to inform the design for a potential commercial facility, Leigh Creek Energy established an ISG demonstration facility. This involved the construction of an above-ground plant and the establishment of a below-ground single ISG gasifier chamber. A pilot plant was commissioned and operated for the 90-day trial period to produce syngas, allowing for the technical and environmental performance of the process to be analysed.

The challenge at hand was to design the ISG process and keep the pilot plant running continuously without any stoppages. ATSys, a Rockwell Automation Recognised System Integrator, was commissioned to develop the electrical implementation and control system for the plant.

The ISG process is a chemical conversion from solid coal to gas. For the reactions to commence, air is introduced through the inlet well, and an initiation device is used to create very high temperatures. As the temperature and oxygen concentration reach optimum levels, a series of reactions convert the solid fuel into syngas, which is then extracted through the outlet well.

The area in the coal seam where the gasification takes place is referred to as the gasifier chamber; the reactions that form syngas typically occur at temperatures of between 900 and 1200°C. Given the process, safety and environmental considerations for the plant, the choice of control and automation system requirements was of paramount importance.

“We selected Rockwell Automation hardware and software for this project because it has been proven to be reliable, and we could be confident that the technology would be fit for the purpose of this project,” said Andre Tassone, Managing Director, ATSys.

The Rockwell Automation PlantPAx distributed control system delivered plant-wide control and optimisation for the plant. By using a common automation platform, the PlantPAx system provided seamless integration between critical process areas of the plant. In addition, the Allen-Bradley CompactLogix controllers together with PowerFlex drives with Safe Torque-Off delivered a fully integrated architecture. The Integrated Architecture solution allowed all equipment to seamlessly integrate over Ethernet into the controllers, allowing fast control with detailed diagnostics for this critical application.

Reducing engineering time associated with installation and commissioning was a key priority for the project. The PlantPAx Library of Process objects is a predefined library of controller code (Add-On Instructions), display elements (global objects) and faceplates that let users quickly assemble applications with proven strategies, rich functionality and known performance.

“By using the PlantPAx Library of Process Objects in the Leigh Creek project, we were able to reduce the engineering and testing time involved,” said Phil Galbraith, Principal Control Systems Engineer, ATSys. “We also decided to design all the equipment on skids to reduce installation time on site.”

As the pilot plant was in operation 24 hours a day, seven days a week, it was important for operators to be able to access data remotely. The platform also enabled the capability for remote access to the production data. In addition to having access to real-time data, it was critical to log data for analytics and reporting, analyse trends, investigate inefficiencies and monitor environmental KPIs.

The Leigh Creek Energy Project ended up exceeding expectations, resulting in the production of commercial syngas with a peak flow rate of 7.5 MMcf/day — higher than anticipated for the ISG process. In addition, the pilot study demonstrated that Leigh Creek Energy has operated the ISG gasifier safely through data analysed from surrounding environmental monitoring wells before, during and after the trial.

The data recorded reveals that the size of the gas resource is significant, making this resource one of the largest undeveloped, uncontracted and undervalued gas resources within the East Coast gas system in Australia. Unlocking the value of such a significant energy resource will provide Leigh Creek Energy with the foundation to progress the project to the next commercial stages.

“The success of this trial has effectively unlocked a large energy resource of huge value and captured key data that validates the fact that this proven ISG technology can be successful in a commercial application,” said Phil Staveley, Managing Director, Leigh Creek Energy.