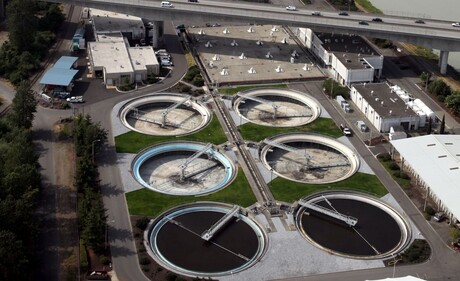 Wastewater isn’t just the water flushed from toilets or drained from bathtubs. It comes in many forms, including rainwater from storms, which can carry chemicals and other substances that could cause harm if used before going through the wastewater treatment process.

Tacoma, a city south of Seattle in a state known for its year-round rainfall, knows the importance of proper water and wastewater treatment to keep its more than 208,000 residents serviced and safe.

The City of Tacoma Environmental Services operates out of two wastewater plants, the Central and North End plants, which maintain 48 pump stations along a 1050-km collection system when combined.

The Central treatment plant was built in 1954 with secondary treatment upgrades completed in 1988 to meet new effluent standards from the Environmental Protection Agency (EPA). In 2006, additional upgrades were implemented to increase the plant’s capacity to 526 million litres per day.

The North End treatment plant was built in 1968 and has a capacity of 114 million litres per day. Major upgrades were completed in the late ’80s to meet requirements from the EPA mandate, and secondary treatment upgrades were added to the plant in 1997. Unique from other wastewater facilities, the North End plant is a physical/chemical treatment plant due to its smaller footprint and transfers solids to the Central plant for processing.

Both plants were operating on decades-old equipment and required upgrades.

“We were dealing with legacy systems that no longer suited or supported our operations,” said Chris Roberts, Tacoma Automation Support Team, City of Tacoma Environmental Services. “It wasn’t a ‘want’ but a ‘need’ to find a new solution for both the Central and North End plants that would make smoother, more efficient processes possible.”

Putting in the (prep) work

The city collaborated with Carollo Engineers, an environmental engineering firm that specialises in the planning, design and construction of water and wastewater facilities, to help with the technology selection process. The combined team evaluated different solutions’ capabilities, support services, associated costs and more. After the extensive selection process, the PlantPAx distributed control system (DCS) from Rockwell Automation came out on top.

“We wanted a solution and a partner that would offer the hands-on support we needed as a smaller player in the DCS world,” said Roberts. “Through our research and evaluation, we found that Rockwell Automation had the local programming and technical support we were looking for.”

Once the technology selection process was completed, the team continued working with Carollo Engineers to prepare for system implementation. This included building system standards, understanding potential unknowns in the ageing systems, creating all new P&ID and control designs, and pinpointing exactly how to take the proof of concept to an implementable design at both plants.

After a three-year preparation period, the city was ready to implement a fully standardised PlantPAx DCS and production intelligence solution to help increase plant efficiencies, save energy and improve visibility into its operations.

Out with the old, in with the new

The flexible, modern DCS provides a plant-wide solution with predefined code and faceplates that improve ease of use for operators. The detailed Library of Process Objects with add-on instructions allows for a standard method of operation, decreases engineering deployment time and simplifies integration of non-Rockwell Automation devices.

“Our operations team requested modified, customised graphics to align closer with the greyscale standard but allow for more colour to match the existing colour schemes of the plants and, because of the flexibility of the PlantPAx system and its object library, we were able to easily do that,” said Roberts.

Historian and production intelligence software was implemented to improve the operator’s view into key process and performance data. The historian collects and archives valuable data from each plant’s equipment and instrumentation, and operators now have automated reporting capabilities and an easy-to-understand view into historical and real-time process trends, such as pumping metrics, and all process operations from the control room.

As part of the solution, the team implemented 22 new PLCs along with an Industrial Data Center from Rockwell Automation to help decrease server footprint and improve infrastructure reliability. The Industrial Data Center is a standard preconfigured infrastructure that offers a virtualised environment for testing configuration and software changes without impacting production, which was a must-have for the city. It also bundles technology from leading IT providers and Rockwell Automation Strategic Alliance Partners Cisco and Panduit.

The implementation process for the full solution began in April 2015 and the cutover was completed in 2017, with only a few additional upgrades planned for pump stations.

All in all, the modern DCS helped the city see into their process more clearly.

With the new system, the city is working on implementing a predictive maintenance strategy versus reactive. If an alarm went off or any issues arose with the legacy systems, operators would have to physically go and inspect what was happening. Now, they have contextualised data through the process software in the central control room, which decreases troubleshooting time and costs associated with operational delays.

The number of alarms, ranging in severity from nuisance to critical, improved with the new system. This helps ensure everything runs properly and allows operators to pre-emptively address any potential issues.

“Our operators now have more data available to observe, and it’s organised in a way that allows them to understand what’s happening at any stage of the process,” said Roberts. “The standardised language and graphics make it easier to document the process and key data points, as well.”

Energy data from the new DCS feeds information to the energy management team to help identify sources of power savings. Currently this team has identified over US$34K of savings each year. This helps the city meet its power-saving goals by better equipping the energy management team to analyse processes and uncover potential efficiencies — such as lowering the pressure set-point to reduce the number of pumps needed, which therefore saves energy.

“We’re always aiming to identify better, more efficient ways to run our plants, and the modern DCS system we have now is helping us do just that,” said Roberts.

The BLV1 Series valves are said to offer both durability and economy for a variety of...