A 'Tasti' solution for a snack manufacturer 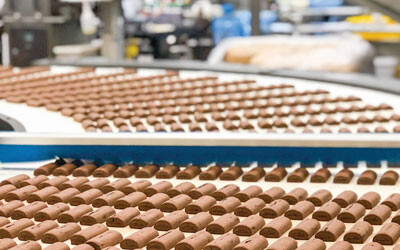 Products manufactured by Tasti Foods can be found on most supermarket shelves throughout New Zealand and Australia. Operating for three generations, the company remains proudly New Zealand owned and operated. The company began life back in the 1930s when two friends decided to start producing crystallised ginger. Fast forward over 80 years and now a workforce of over 250 produce a wide range of food products including co-manufacturing for a number of internationally recognised brands. They also supply nearly every supermarket chain in New Zealand and Australia with private label snack bars.

Tasti has been in its current purpose-built facility on the Te Atatu Peninsula for almost 50 years. In that time the factory has been extended and refitted several times as the company has grown. This modern facility is fully automated and designed to deliver the highest quality products, and Tasti continues to invest heavily in the required plant and facilities to ensure it can operate efficiently and to the highest quality standards.

The existing compressed air system was struggling to reliably and efficiently meet requirements. Recurring failures in the compressed air line were creating downtime in some areas of production. At the same time as these issues were occurring, Tasti had begun planning the expansion of its facility to include a new hall specifically to manufacture its burgeoning wholefoods ‘free from’ product range.

As Tasti started the planning process for the new build, elevated electricity bills had also led them to invite Energy NZ to conduct an audit on the existing facility. One area the audit highlighted was that cost savings could be made by investing in compressors that were connected through a controller to each other, and were well staged. As the facility had developed over the years, so had the compressed air system grown and changed, and the existing compressors were therefore not linked together and had no staging control. There was also no ring main connecting all compressed air applications in the facility together to one compressed air source.

All of these factors together led Matthew Barber, the Maintenance, Engineering and Environmental Manager at Tasti, to take the new build as an opportunity to address the entire compressed air system for the facility.

“We saw the expansion as the ideal opportunity to find one solution that would not only solve the issues we were having with the existing compressor system, but would also allow us to get the whole plant set up on a ring main from one central compressor room,” he said. “In addition, we were keen to digitalise the compressed air system — linking all of the compressed air equipment together for optimum efficiency and system control.”

Barber invited a number of compressed air providers to review their requirements and recommend a solution. Kaeser Compressors was one of those invited to tender for the project and was successful in meeting Tasti’s criteria. As a result, a complete Kaeser system was installed, as well as a ring main that now connects all of the compressed air applications throughout the facility to the new system.

For Tasti, incorporating the Sigma Air Manager controller enabled the company to have control of the entire system. The Sigma Air Manager utilises adaptive control to make air generation and treatment more reliable and efficient. By predictively calculating and comparing various operating scenarios, it selects the most efficient settings to suit Tasti’s specific needs at any one time. Compressor flow rate and energy consumption are therefore always optimally matched according to actual air demand. In combination with the integrated multi-core processor industrial PC, the adaptive control is able to ensure optimised performance for Tasti at all times.

Now up and running, the new Kaeser system is delivering a reliable, efficient and high-quality source of dry compressed air throughout the facility.

The Kaeser EBS 410 rotary screw blowers have been designed especially with water industry...

The DC series of desiccant dryers from Kaeser Compressors can lower the pressure dewpoint of the...

The Mobilair 500-2 is said to combine the advantages of a two-stage dry-running oil-free rotary...