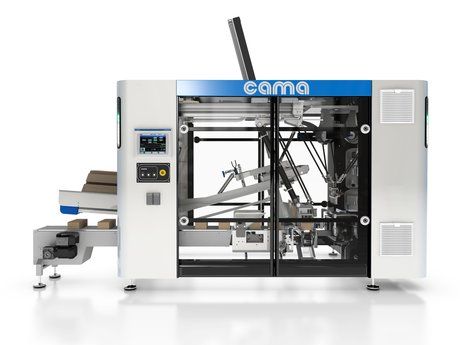 European packaging machinery supplier Cama Group recently opened an Australian office to service the local market. Cama designs and develops packaging machines and robotic systems for use in food and non-food industries, and covers the primary and secondary packaging processes. The Cama Group is headquartered in Italy, with subsidiaries in France, the United Kingdom, Germany, Thailand, the United States, China and now Australia.

At a time when the local manufacturing industry is facing unprecedented challenges, the foresight of Cama to invest in Australia and to lead the way for European packaging suppliers demonstrates its innovation and commitment to the market here.

According to Cameron Traum, general manager, Cama Australia, “Cama understands the importance of direct contact with our clients, and we want to make sure our service standards are the best in market. The only way to make sure we can do that is by investing in the market and being here in Australia.”

One of Cama’s Australian customers, Country Chef, recently upgraded its slicing and flow wrap machines but needed an advanced end-of-line packaging solution to exploit and leverage the new efficiency and speed gains. Replacing a labour-intensive manual operation with a machine like the IF316 provides small businesses with greater efficiencies and, in this case, allows Country Chef to compete more readily on a national level, supplying the biggest retailers.

Cama’s IF316 is a compact machine which includes a compact former, a loading system with delta robot and a closing system with a two interpolated axis robot incorporating a specific lidding tool. The machine is set up for the secondary packaging of flow-packed snack bars but can be adapted to pack other kinds of products, and can be easily integrated in a packaging line just before the palletising station.

The IF316 has been built by Cama according to its cabinet-free design concept, offering a reduced footprint by integrating the electrical and pneumatic component control cabinets into the machine pedestals’ angles. Such compactness helps to minimise cabling and makes it easier to place the utility devices right where they are needed, with further benefits in terms of accessibility for maintenance tasks.

The automation system on the IF316 has been designed and built using Rockwell Automation components. An Allen Bradley 1756-L72S GuardLogix controller manages the machine’s functions by synchronising the three phases of the packaging process.

Using RSLogix programming software Cama configured a 10-axis motion system, managed by Allen-Bradley Kinetix drives. Synchronisation among the drives has been programmed using a virtual axis master. An Allen-Bradley PanelView Plus operator panel has been selected for visualisation tasks and is configured through FactoryTalk View software. Flexible I/O and EtherNet/IP connectivity complete the automation architecture on the machine.

“Rockwell Automation is recognised all over the world as a leading automation, motion and safety supplier to the packaging industry, so it makes sense that Cama uses a company that can offer us the same levels of supplies and services that we offer to our customers,” said Traum.

“While the local market is very mature and robust, companies are still actively seeking ways to improve efficiency and reliability in manufacturing and they understand the need to invest in technology to remain competitive.”

Cama’s value proposition is its well-known brand and reputation, together with its experience and range of secondary packaging solutions. This is further enhanced by Cama’s new Australian presence, allowing customers to deal with a local office in a local time zone.

According to Traum, “The key is being here and offering the service from the first contact. We make sure that everything we do is best in the market, including our speed of response and service with attention to detail.

“The reaction to our local presence - having our own spare parts and service established within Australia - has been overwhelming. We are involved in significant projects in the market, so it looks as though we will exceed all our expectations in terms of involvement in the market and returns in the first 12 months.”

The AIRe Lens smart glasses device is designed to enhance training and knowledge sharing in...

Hygenius is food-grade conveyor that has been designed to reduce flat surfaces, cracks and...