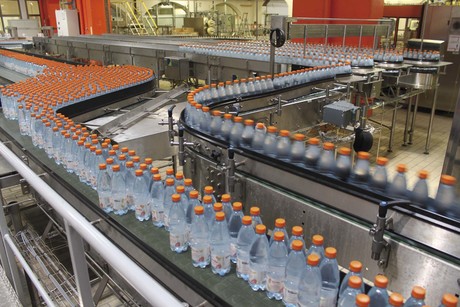 One of the largest producers of mineral water in France, Carola, is producing a lighter PET bottle and, in doing so, has also increased output speed by 3000 containers/h. It follows a line upgrade by Gebo Cermex, with installation and ramp-up to full-speed production achieved in less than three weeks.

Following the buy-out of the Carola by Spadel, the international group focused on the bottling and marketing of natural mineral waters and a varied range of refreshing drinks, which called for a complete overhaul of the Ribeauvillé PET line facility, in Alsace (France). The ageing line was causing problems because of its limited flexibility, restricted accumulation capacity, reduced speed due to the limitations of certain machines within the line and poor working conditions. More importantly, the performance of the line was preventing Carola from keeping pace with the fast-changing beverage market and the fluctuations in consumer demand. The company was also eager to minimise the weight of the bottles it was producing and to switch to more modern packaging formats. The new owners’ investment strategy included a plan for the reduction of production costs.

Gebo Cermex was selected to undertake the modernisation work following the success of a project previously executed at Carola. Thierry Klein, director of production maintenance at Carola-Ribeauvillé, explained: “We have tested Gebo Cermex capabilities around a returnable glass line and we have been especially impressed by their expertise in line automation and project management. That positive experience convinced us to trust the company again for this upgrade, because we knew their skills would be priceless for our new PET line.”

Within this type of installation, which covers everything from bottle conveyors right through to the palletiser, the connection between the line’s various pieces of equipment is vitally important. Output performance is largely determined by the efficiency with which the line handles increases in speed as well as stoppages.

The project at the Carola-Ribeauvillé factory presented the team in Gebo Cermex with several other challenges. On one hand, the company had to change everything within a complete production line without creating a supply problem for the water producer. This meant that Gebo Cermex had to replace all the equipment and get the entire line back in operation at full speed in all formats in no more than 21 days. On the other hand, the customer had to upgrade the line, taking up no more room in a facility where floor space was already at a premium.

José Lefort, industrial manager at Carola-Ribeauvillé, commented: “It’s clear that this project has been a success. It’s more than lived up to our expectations. The line productivity target has been met — and speed and line regulation have been optimised for all packaging formats.”

The new line has increased output rates by 3000 bottles/h for all packs’ formats. This increased productivity means that Carola can now produce greater volumes to tighter deadlines, enabling the company to respond to spikes in demand while reducing the stock managed for this purpose by an external storage provider. Lefort continued: “Increasing output speeds by around 3000 bottles/h for all formats has allowed us to switch to two, eight-hour shifts — with barely any production now taking place at night.”

The most crucial stage of the project, the dismantling of the existing line and the assembly of the new equipment, took place well within schedule and the restart proved successful for all formats, which now includes packs of 6, 8 and 24 bottles. Production speed was quickly ramped up and within a month the whole line was running at 75% line efficiency. All the machines and conveyors were reinstalled as close as possible to the ground so that they were directly accessible with no need to climb up on walkways — unlike the previous line. Line control is one of the major strengths of the new system, not least the advanced management of stoppages and restarts on the conveyors and the accumulation tables between the machines. Format changeovers on the new line are also much more efficient than they used to be.

Lefort concluded: “We’ve had no problems at all. Thanks to this project, we’ve been able to introduce a new and lighter bottle design. All the new bottles are perfectly stable on the conveyors. That meant that we were able to deliver our clients’ orders without interruption — while offering them new packaging options.”