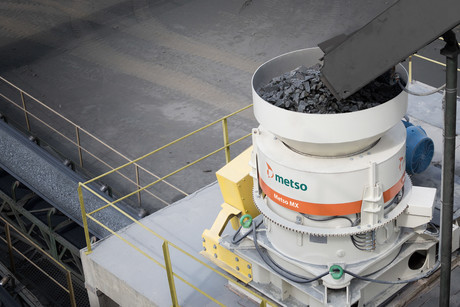 Minermix is the newest of three quarries owned and operated by Extrabase Mineração, the quarry material arm of Brazilian civil construction company Grupo Base. Located in the small city of Capivari, 140 km northwest of São Paulo, the facility has delivered a nominal production rate of 200,000 tonnes per month for the past seven years. The quarry’s process includes primary, secondary and tertiary crushing. With a single stockpile — unlike the company’s other quarries, which have two stockpiles each — the Minermix Capivari facility needed to boost its production.

At the same time, Minermix wanted to reduce the presence of rock dust (fines) in its production of sand from gravel. The company’s manufactured sand is primarily used by concrete plants where the excessive presence of fines poses a significant problem. Minermix also wanted to ensure the best possible product tolerances, but was constantly challenged with the need to adjust its equipment to maintain production quality. The company believed the operation could have been more productive, requiring fewer equipment adjustments by its operational staff.

Minermix’s crushing plant is fed with basalt from a site located approximately 1 km from the processing facility. The plant’s primary crushing stage employs a Metso Nordberg C125 jaw crusher, followed by secondary crushing via a Nordberg HP400 cone crusher. Material requiring further processing is crushed in two parallel tertiary crushing stages. Up until January 2016, this job was performed by two 400 hp Metso HP4 cone crushers that were installed when the quarry was originally commissioned in 2010. The company replaced one of these crushers with a 400 hp MX4 multi-action cone crusher which now works alongside the remaining, original HP4, making Minermix among the first sites in the world to install one. The installation was part of a multisite pre-launch field trial of Metso’s latest crusher design. Since commissioning the new machine in January 2016, Minermix says that the MX has significantly improved plant performance.

Minermix’s supervisor, José Nilson, says that the MX4 was installed and commissioned with extensive support from Metso, which included comprehensive operator training. He said that since its start-up, the new machine has delivered a 20% increase in productivity. Nilson believes that further gains are possible by fine-tuning the machine’s operation. In his opinion, overall productivity may improve by as much as 30%.

The supervisor mainly credits these improvements to the fact that the crusher can be adjusted while operating at full load without the need to shut down, as well as its ability to utilise maximum power. “The equipment reaches 95% and, when it gets to peak production, the equipment itself makes the adjustments to balance production,” said Nilson. The new crusher has also reduced rock dust production by 5–10%. “It may not seem like much, but this reduction has a notable bearing and impact on daily production,” he explained.

The MX cone crusher’s operation is based on patented multi-action technology, a revolutionary way to automatically optimise crusher operation. The machine can simultaneously adjust its setting with a rotating bowl above its cavity and a hydraulic piston inside the machine’s fixed shaft. Dynamic setting adjustments can be made when the crusher is operating under full load conditions without the need to stop production. Both rotating bowl and piston adjustments are fully automated, so no human intervention is required.

“The MX4 works throughout the day, automatically adjusting its opening/setting or power to our specifications,” Nilson added.

Nilson notes that the MX4’s automation has improved overall operation. “The operator turns on the equipment with a single touch of the crusher’s automation panel, which also allows the machine’s operation to be monitored throughout the day and gives us a final report when the equipment is turned off,” he stated.

On a weekly basis, the MX4 crusher is calibrated by initiating an automated procedure that takes five minutes at most. Calibration determines the degree of wear in wear parts and adjusts machine settings accordingly. This assessment also enables the correction of any parameters that are not aligned with what has been pre-established by Minermix. Wear part replacement is performed after around 1200 hours of operation, which is more than one-third better than before. The company says that the MX’s wear liner life is at least 30% higher than traditional cone crushers.

Image caption: The new MX4 crusher in operation at the Minermix Quarry in Brazil.

The latest sanitary bulk bag filling system from Flexicon can achieve fill rates of up to 40 bulk...

The AV500 scanner has a high-resolution 5 MP sensor, image acquisition at 32 fps, dynamic or...

The AIRe Lens smart glasses device is designed to enhance training and knowledge sharing in...

Getting a grip on pet food pouches

FSANZ call for comment on additive to preserve beverages