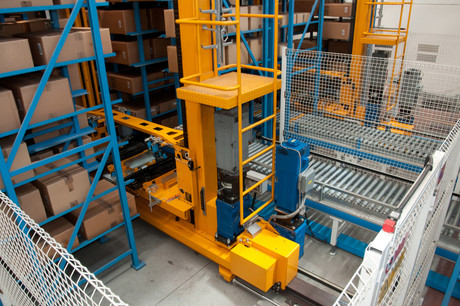 How incremental improvements can impede innovation in the automation of warehousing and distribution.

Kaizen. It is a word synonymous with improvement in organisations around the world. While the Japanese word literally means ‘improvement’, in industry and business the focus is on small, continuous steps to better processes. It is embedded in the management thinking of many organisations.

Japanese businesses developed Kaizen practices around the 1950s, most notably Toyota as part of its Toyota Production System. After studying why the company was so successful at high-volume production of high-quality vehicles in the 1960s, Masaaki Imai wrote several books on Kaizen and formed the Kaizen Institute, spreading the knowledge and practice around the globe.

However, there are times when Kaizen is not enough. Worse still, a small improvement can often hold an organisation back, perhaps even stifling significant development.

This is known as the Kaizen Paradox.

In the 1980s, author and business professor Oren Harari famously pointed out that not everything that exists could have been developed by continuous improvement alone. This idea is captured in another Japanese word that is less well known but equally important: Kaikaku.

Kaikaku means ‘radical change’. It describes the other side of improvement: the major step forward, or big leap. An analogy is a home illuminated by candles; while Kaizen improves upon the candle, Kaikaku is the installation of electric light.

Kaikaku is a less famous but equally important part of the Toyota Production System and is often overlooked by organisations in their rush to embrace Kaizen.

Figure 1: Kaizen and Kaikaku. For a larger image click here.

The Kaizen Paradox and the issues it creates

By focusing exclusively on small improvements, an organisation may miss an opportunity to gain a competitive advantage in costs and customer service. If competitors take a big leap, an organisation will be left behind, still making candles in a light bulb market.

Small improvements also commit resources that could be better spent towards a larger step forward in performance, or with more strategic planning, could have contributed to a major change.

Finally, when a Kaikaku opportunity exists, the Kaizen path weakens the Kaikaku ROI and productivity can plateau at a lower level. This is the Kaizen Paradox at work.

For example, many businesses rightly identify the need for warehouse automation but make the assumption that they need to ‘start small’. Yet unless the interim investment is part of a planned larger final system it could be a false start.

In a second round of investment, Company C, which is still a manual warehouse but with smart warehouse management software, has a choice to make — C1 would be to invest in a fully automated solution to sit under its new WMS. The second pathway (C2) would be to make the smaller investment in mechanisation of its manual warehouse. Both investment paths would achieve an ROI under three years, and so either pathway would get approval. 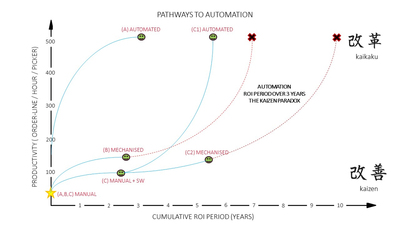 Company B’s warehouse managers eventually decide that the time has come to automate. They investigate the cost and find the ROI doesn’t stack up any more (it is over three years) — so they fail to automate. They understand why — their base level of performance has increased through mechanisation, but the cost of the automation is much the same as it was.

In a third round of investment sometime later, company C2 discovers the same problem. Even though its baseline performance has improved, the return on investment period for full automation extends to more than three years. In summary, 50% of the four investment pathways to automation were unsuccessful due to the smaller improvements that have already been made.

This is the Kaizen Paradox at work.

It is important to note that ROI limits for investment are contributing to the Kaizen Paradox that companies are experiencing. To solve this pitfall, companies should review their ROI restrictions for warehouses with existing mechanised systems already in place.

The Paradox in practice

In a recent real-world example, a company was seeking to identify a solution for an automated ‘goods-to-person’ warehouse in a bid to achieve a significantly higher level of business performance.

However, a year earlier the company had invested in a mechanised ‘zone-to-zone order picking’ solution, consisting of conveyers and carton storage shelving.

Although the project was still in the commissioning phase, senior management could see that the solution wasn’t going to meet their long-term requirements. Fortunately, the mechanised solution didn’t occupy the entire warehouse, making it possible to build an automated goods-to-person solution on the same site.

Developing a business case for a goods-to-person automated solution, the company gathered quotes to either move the zone-to-zone solution, redesign it or scrap it altogether.

It soon became clear that the mechanised system made it much harder for them to proceed with the automation required, as the business had invested a large sum on a now largely redundant piece of equipment that occupied a prime position in the warehouse. Unless the mechanised system could become part of the fully automated solution, the company also faced the cost and embarrassment of scrapping the new installation.

This Kaizen Paradox hasn’t only occurred to this one organisation and doesn’t only occur in the case of zone routing solutions in warehouses. It is just one example of a common predicament for many businesses, where investments are made to achieve productivity gains, but in doing so they dilute the business case for a better investment, causing them to plateau at a lower level of productivity.

Both manual and mechanised warehouses involve ‘person to goods’ in some form. The difference being the way the order tote moves around the facility, trolley or picking truck to conveyor, and the addition of WMS software to control order picking more efficiently. These improvements have helped reduce the time between pick operations and gradually lift productivity from around 50 to 150 order lines per hour per picker.

The Kaikaku occurred when goods-to-person technology was developed that radically transformed the way orders were picked, allowing a stationary worker or a robot to pick from products delivered to them in sequence. This can typically boost individual picker performance to between 500 and 1000 order lines per hour and minimise the labour required, while at the same time significantly reducing the warehouse footprint due to higher density storage.

An automated goods-to-person warehouse can typically achieve the same throughput as a manual or mechanised operation, with around half the staff and in half the building size. As a result, a strategic approach to automation can save significantly on the cost of warehouse expansion or remove the need for relocation, prolonging the life of the existing facility.

In the age of Industry 4.0, we have many tools that enable us to accurately model and predict the performance of solutions. Real product master and order line information can be used to simulate and emulate each type of technology and test its productivity impact.

Using new virtual reality tools, it is possible to build an automated solution in cyber space and take a virtual tour, watching as orders are assembled and dispatched, confirming the effectiveness of the solution before being purchased. This ‘cyber-physical’ approach allows an organisation to perfect their new operation and make the greatest Kaikaku advance before any physical system is built.

Also, as many advanced technologies are modular and can scale with growing demands of the business, the combination of predictable and adaptable performance effectively eliminates business risk, freeing executives to make investment decisions with greater confidence.

This more strategic approach to Kaikaku can protect an organisation from being trapped in a focus on low performance operations: being cursed with the Kaizen Paradox.

Next steps for boards and managers

For many of the most successful organisations, major leaps forward in performance are approached strategically. Kaikaku investment is made before Kaizen improvement.

Before embarking on a technology path or even selecting a building, businesses should consider their long-term requirements and how technology could be implemented.

It may be achievable in phases if this is planned from the start. Use of an Industry 4.0 approach and modular systems can significantly mitigate long-term business risks.

Strategic improvement plans are more robust when they consider costs that could have been avoided. These could include land and buildings, equipment, labour and the cost or service issues associated with pick errors and returns.

There should be agreement at senior levels that any innovative leaps identified are critical to success and must be planned and scheduled properly to optimise ROI and avoid plateauing or future waste.

In developing their optimal plan, organisations can develop a well-defined gap analysis, outlining the incremental improvements and innovative leaps they need to either catch up with global leaders or take the global lead in their industry. The organisation should have confidence that it has the capability to close these gaps as quickly as possible or can engage partners with the required experience.

As part of that approach, meetings and site tours with industry leaders and technology providers can gain awareness of current KPIs that are achievable for key processes within an operation.

Transition planning between technology providers and warehouse managers provides another critical step in ensuring that no opportunities are missed, and the installation of new solutions can be phased in appropriately.

Every business is striving to improve, but not all improvements are complementary or equal. Opportunities to stay ahead of the competition can be stalled by an organisation’s own efforts. Critical to enduring competitiveness are a regularly reviewed strategic approach to improvement, and a long-term strategy to deliver.

The Kaizen Paradox is a common predicament for many businesses, where investments are made to achieve productivity gains, but in doing so they dilute the business case for a better investment, causing them to plateau at a lower level of productivity. Once organisations are aware of the potential for investments that create a Kaizen Paradox, they are better able to consider potential improvements as part of a bigger, longer-term picture.

*Paul Stringleman is a Senior Consultant at Swisslog. He began his career in intralogistics 20 years ago in Tokyo, Japan, and has spent 15 of the last 20 years living abroad and designing large-scale automated systems for airports and distribution centres. In the past five years, Paul has developed several data-driven automated warehouse solutions for e-commerce retail companies in Australia.

Researchers have developed an app that enables individual components with no barcode to be...

The three most widely available RFID systems offer differences in performance for different...