Safe monitoring of pressure peaks in gas- and fluid-filled pipelines 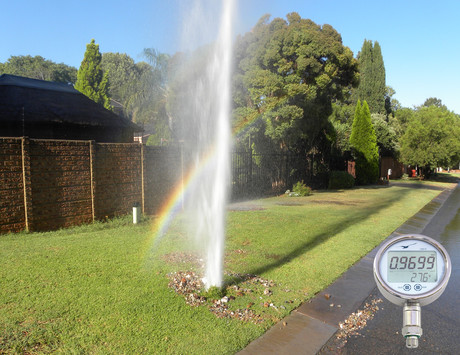 High pressure peaks in pipelines can reach catastrophic levels if not detected in time.

Pipelines filled with gases or liquids are an integral part of any industry. They are used for transporting and dispensing liquid, supplying compressed air, for hydraulics applications or for supplying water. Regardless of the application, they are not generally well-protected from dynamic pressure fluctuation caused by abrupt changes in flow rates, which can occur in normal operation.

Pressure surge is considered a ‘time-bomb’ as long as fluid-filled pipes are around. This was described in detail as early as the 1st century BCE by Marcus Vitruvius Pollio, a Roman architect, civil engineer and author. Problems of high pressure build-up in aqueduct construction were reported to occur in many of the finest examples of Roman architecture, such as those at Segovia and the Pont au Gard. In fact, they occur in all fluid pipelines systems and could potentially lead to pipeline fatigue and catastrophic failure.

The main cause of pressure surge originates from the sudden change of fluid velocity in the pipeline system. The root cause of this phenomenon generally arises from the normal operation of pumps and valves. It may also be due to expulsion of air from the piping system. Although these problems can be minimised through proper sizing and design of pumps and valves, they cannot be completely avoided, as it is impossible to close a valve at an infinitely slow rate to avoid any inertial effect. This is why installing a reliable monitoring system is important for early detection of pressure build-up to avoid potential catastrophe.

Sensors and pressure dampers are typically used to solve this issue. They may provide the operator with real-time operational data and immediate action can be taken when a problem arises, enabling them to minimise the impact of pressure surge. However, these methods are not capable of detecting and recording extreme pressure peaks. Overpressure peaks can arise in a matter of milliseconds, and can go undetected with such a monitoring system.

KELLER AG have developed a special digital manometer, LEO1, that is capable of recording pressure at a rate of 5000 readings per second. It is specifically designed to detect extreme pressure peaks with fine temporal resolution. The LEO 1 is a microprocessor-controlled, accurate and versatile pressure measuring instrument with the capability of measuring from -1 to 1000 bar with 200 mbar resolution. An optional intrinsically safe and ATEX-certified version of LEO1, LEO1 Ei, incorporates an additional protection switch for use in hazardous areas.

For additional recording capabilities, the high-resolution digital manometer, LEO5, is available. It can be easily adapted to application-specific measuring requirements due to its modular design. An optional Bluetooth interface is also available for pressure measurements in inaccessible or hard-to-access areas. With LoRa technology, this sensor is capable of connecting to the cloud and communicating real-time data for analytics. It also has a low power consumption and is optimised for IoT applications.

Having these devices in a monitoring system improves the safety of the overall site and minimises the possibility of catastrophic pipeline failures. They can also be used as early accident prevention devices, which are invaluable tools for maintenance. The pressure peak could indicate damaged machinery and notify the operators of early maintenance requirements. Their ability to integrate with LoRa technology for IoT applications further increases efficiency and productivity with minimum additional cost.

As the era of the IoT is approaching, the demand for sensors will continue to increase. Bestech Australia supply pressure sensors from KELLER AG in Australia and New Zealand, as well as industrial sensors for measuring a wide range of physical parameters such as displacement, temperature, force, load, torque, level, colour, angle, acceleration, motion and vibration. Bestech’s factory-trained applications engineers can assist with providing sensor solutions for specific measurement requirements.

Are your snacks too salty or too sweet? The SolidFlow mass flow meter from Group Instrumentation...