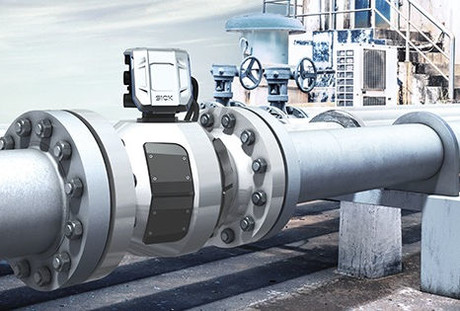 US manufacturer Big Elk Energy Systems, LLC has developed one of the world’s first mobile gas flow rate test benches. This system can be used to verify gas meters that are installed in high-volume gas installations without interrupting operation. At the heart of the mobile M3 system is the ultrasonic gas flow meter FLOWSIC600-XT Quatro from SICK. The meter combines two measuring systems in a single meter body, thus offering full redundancy in a very compact enclosure.

“When it comes to measuring high volumes of gas, two things are paramount: uninterrupted operation and minimal measurement uncertainties,” said Geoff Hager, CEO of Big Elk in explaining the background of the system. “To ensure the latter, gas meters are in some cases recalibrated on a regular basis. The cycles are either stipulated by law or agreed between operators. Increasingly, they are also being determined as required on the basis of equipment diagnostics. However, recalibrating the metering package system is a major hold-up for operations. Gas meters need to be removed and transported over long distances — with lots of associated risks such as transport damage. In the meantime, the system has to use redundant equipment to continue operation, often with reduced capacity. It can take weeks, and sometimes even months, until the meters can be reinstalled.”

In an effort to reduce this regular workload and expense, Big Elk has designed one of the world’s first mobile flow test benches. The patented Mobile. Master. Meter. system (which is shortened to just M3) can be transported by truck to the measuring stations. Once it has arrived there, the test bench is connected to the existing pipe system and thus integrated into the gas flow. The adjustable high-pressure connection pipes of the M3 — for different run lengths, heights, angles, and positions — can be easily positioned with a crane and smoothly connected with overlapping slip joint connectors. Big Elk has thus solved a core problem that defeated earlier concepts for portable test benches.

Another special feature of the M3 is the verifiable ultrasonic gas flow meter FLOWSIC600-XT Quatro from SICK. With the aid of state-of-the-art technology, the meter combines two measuring devices in a single unit with a 4+4 path concept. This permits redundant control measurements, which are important particularly given the high demands that are placed on a test bench. Here, intelligent diagnostics ensure that even the smallest changes in the flow behaviour can be detected. At the same time, FLOWSIC600-XT Quatro is also unusually compact and can tolerate vibrations during transportation — another ideal prerequisite for a mobile test bench.

“Right from the start we wanted an ultrasonic gas flow meter for the master meter,” explained Hager. “It had to be a highly reliable measuring device so that we could maintain the calibration of the master meter at a level of at least 45 m/s. As well as this, confidentiality was extremely important to us during the long R&D process. Both of these factors led us straight to the SICK team in Houston. Some of us had already been working with SICK teams for over 20 years. We value the close personal relationship, and in addition the SICK ultrasonic product line is the standard for so many of our key clients.”

Deciding on the FLOWSIC600-XT Quatro

Hager explained that the decision to opt for the FLOWSIC600 XT Quatro had not been without risk to start with. “The XT, which is the successor of the popular FLOWSIC600 Classic, was new, and we weren’t familiar with it yet.

“We wanted a 4+4 design — the M3 is claimed to deliver outstanding results in every application, and full redundancy is the key to this. But to start off with, we were happy with the predecessor model FLOWSIC600. It was only when we started discussing the project that several SICK team members started suggesting the XT.

“What ultimately tipped the balance was the innovative design and the new style of condition-based indicator of the XT, which enables improved control diagnostics even within a normal 4-path configuration,” he continued. “With the current M3 test bench, the pressure is limited to the full ANSI 600 class. Initially, calibrations are offered for 4″ to 12″ pipe diameters. In fact though, all speeds between 30 cm/s and 45 m/s can be recorded. A second model is being planned for line sizes up to 24″ and for pressures up to the ANSI 600 class.”

The M3 was launched at the start of 2018 after extensive field studies and reworking. It is initially being used in two projects, and further orders have already been acquired. “We believe that we can cover over 80% of the basic applications installed in the USA with this test bench,” said Hager. “But we also have plans for additional units — in particular for a wider service range, but also to cover larger meters and higher pressure classes.”

The M3 solution may still be in its infancy. But the Big Elk team thinks it is revolutionary: “We firmly believe that this is going to be a major success. It is undoubtedly just a question of time until field testing of ultrasonic gas meters becomes the default method for gas pipeline operators.”

The release of a series of advanced digital panel meters from Watanabe Electrics is intended to...