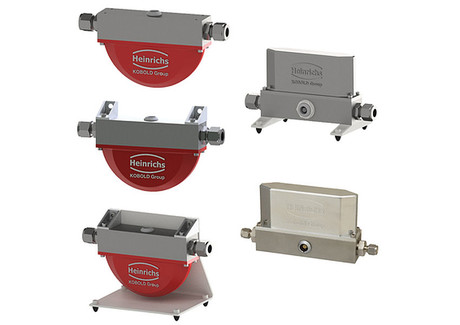 Heinrichs Messtechnik GmbH, a member of the KOBOLD Group, has announced what is described as the world’s smallest dual-tube Coriolis flowmeter with a length of less than 15 cm. The High Performance Coriolis (HPC) mass flowmeter extends dual-tube advantages to lower flowrates.

In conventional dual-tube Coriolis flowmeters, magnets are mounted on one tube, the exciter and sensor coils on the other. However, in very small sizes, for example, where extremely low flow rates demand a tube diameter of 1 mm, the vibrating behaviour of the coils’ weight can significantly influence measurement results. It is therefore common practice to use one-tube systems for these applications, where the coils are mounted to the chassis.

But eliminating the second tube removes it as a measurement reference, requiring the sensor coils be mounted on the chassis and making the sensor more susceptible to shock and vibration, making the meters overly costly.

To reduce this sensitivity and deliver accurate measurement at very small flow rates, Heinrichs Messtechnik GmbH has designed a dual-tube Coriolis meter, in which the sensor coils are mounted between, instead of on, the tubes.

“With an installation length of less than15 cm, it’s now possible to achieve high-accuracy measurements with deviations of just ±0.1%,” said Frank Schramm, Managing Director, Heinrichs Messtechnik. “Furthermore, the sensor shows insensitivity to temperatures of up to 177°C, to pressures of up to 5800 psi, as well as to strong vibrations.”

The coils are mounted on a printed circuit board between the tubes. “This method also enables the use of four sensor coils instead of two, as is usually the case with dual-tube Coriolis, providing a higher resolution,” Schramm said. “On the measuring tubes themselves, only very light magnets are mounted, which with a weight of only 0.08 g, having little to no influence on the vibrating behaviour of the tubes.”

The company claims the HPC displays extreme insensitivity towards external influences, allowing for precise measurements with a maximum deviation of ±0.1% of the mean value and a zero-point stability between 0.001 and 0.005. A measuring tube working frequency of more than 200 Hz prevents coupling of installation vibrations or similar oscillations into the measuring system.

FOCUS-ON is a newly founded company dedicated to the development, production and marketing of...