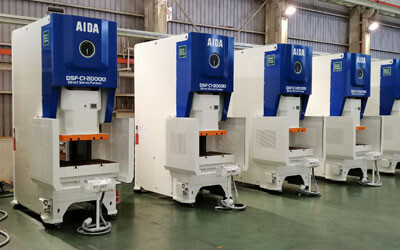 Established in 1995, the subsidiary manufactures more than 500 press machines annually for markets worldwide and plays an important role as one of Aida Engineering’s five manufacturing bases outside Japan.

The challenge began when the local power provider pointed out that the Malaysian subsidiary’s six-month energy consumption exceeded 3 million kWh in total. The company was obliged to hire a dedicated energy manager who would be responsible for checking monthly electricity consumption and reporting it to local authorities every six months.

A key feature of EcoWebServer III is the capability to constantly measure real-time power consumption data and visualise it as a graph in order to compare it with target figures.

Along with the EcoWebServer III, the company also installed Mitsubishi Electric’s EcoMonitor Series energy measurement units to measure the energy use of equipment and individual production machines. Each dataset was compared and analysed in order to promote peak-shift initiatives. For example, the company turned off the air conditioning when using machines that consume a large amount of electricity, while also trying to use such machines in the evenings when air-conditioning demand was low.

“By shifting the peak demand to the time of day when the energy price is low, we were able to reduce our electricity bills by 15%,” said Hideki Mawatari, Maintenance Manager. “The effect was immense. We were able to collect the data we needed, and what’s more, the payback period was shorter than one year.

“The EcoWebServer lll was very easy to install,” he added. “We considered other choices, but what attracted us about Mitsubishi Electric’s solution was the fact that the EcoWebServer lll can be easily connected with existing equipment. It is also scalable, so we can add up as we go along.”

Having succeeded in shifting the peak energy demand, Aida Engineering Malaysia’s next challenge is to reduce the total amount of energy it consumes.

Energy saving could be simply executed by turning off all machines, but then you are unable to produce, leading to reduced income. Air conditioning was initially meant to maintain the quality of the products, so a long downtime could potentially impact production quality.

“Our focus now is to maintain product quality and reduce energy consumption at the same time,” said Mitsuru Hirasawa, Managing Director. “We will increase the number of items we collect data from, and will utilise EcoWebServer III to determine the energy per unit produced (EPU). We also have plans to introduce preventive maintenance and integrated management of energy and production data, which we will eventually make accessible from the factory floor.”

EcoWebServer III can be connected to PLCs to collect production data in real time, making it easy to visualise power consumption on a per-unit basis. By making the data accessible from the factory floor, it will encourage factory workers to promote energy-saving initiatives. As a result, power consumption should start decreasing on a per-unit basis, which will eventually lead to saving total energy demand.

The OPTISONIC 6300 series of ultrasonic clamp-on flowmeters has been updated with the latest...

The TT351 is a 4-wire transmitter that converts a 4- or 6-wire strain gauge bridge or load cell...