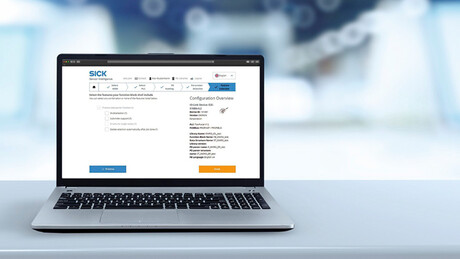 Anyone who wants to integrate IO-Link devices into controls and access device parameters or collect diagnostic information in the process has to program many acyclical requests and deal with many different devices, parameters and complex data types. The Function Block Factory (FBF) from SICK, an open software-based service, automatically creates function blocks that considerably reduce the time and effort needed for implementation — not only when accessing the device parameters, but also the individual elements of process data of the IO-Link devices.

The FBF is the first web-based service of its type for facilitating the integration of IO-Link device data into control programs. The software service not only makes function blocks available, but also data structures that ensure there is no effort needed for the declaration of parameter variables. The FBF also ensures that complex searches for parameters, their indexes and data formats are a thing of the past. This not only saves considerable development time and programming effort, but also eliminates errors, thereby accelerating commissioning.

The prevention of errors with the function blocks results from the fact that the FBF concept was originally used internally at SICK for a long period of time and on a proprietary basis for its own IO-Link devices. The version further developed and opened for the market is therefore thoroughly tested for functionality and reliability in real applications. The user can create their own function block libraries with the FBF, with individualised parameters and functions as well as names and designations. The tool currently supports ten automation systems and all IO-Link devices from all manufacturers on the market. This openness becomes meaningful when, for example, the same machine of a manufacturer is equipped with different automation systems for different customers: the FBF considerably reduces the complexity of the task and accelerates implementation.

Machine manufacturers, integrators and end users use IO-Link devices because they expect added value for their machines, plants and processes from their smart functions, diagnostic functions and extended information, as well as the possibility of solving applications in an alternative way. For example, device parameters are read out from the control so they can be used for diagnostic purposes in downstream applications such as condition monitoring. The option of parameterising IO-Link devices during ongoing operation, for example when changing production orders or implementing batch size 1 applications, is often also important. The realisation of such tasks can be quick, easy and fault-free when using the FBF from SICK. The web-based service makes it possible for users to configure and create their own individualised function block libraries from the I/O device description (IODD) of an IO-Link device in order to reuse them in their PLC programs as often as desired.

This reduces programming effort to a minimum, and errors are prevented during communication with IO-Link devices. The scope and content of the libraries can be defined individually through free selection of the available device parameters and can be adjusted at any time. The process data parser function, which is also generated by the FBF and is part of the library, makes it possible to systematically access any individual piece of information in the IO-Link process data without having been previously informed of its structure and contents from manuals. The FBF is accessed through a browser via the SICK homepage, either from the Internet page of a SICK IO-Link product or from the service menu. A new user registers at the time of first use, and known users log in with their SICK ID. Then the desired IODD is selected, based on which function block library is to be created. The IODD is obtained from IODDfinder. An FBF filter function ensures a good overview of the eligible IODDs. If IO-Link devices and the IODD are identified, the desired PLC is selected with its engineering tool and the fieldbus. This sets the framework conditions for the creation of the function block library. In the next step, a name is given to the function blocks, the parser function and the data structures. This makes it possible to create these in line with the user’s own naming convention for the first time. The desired device parameters are then selected. 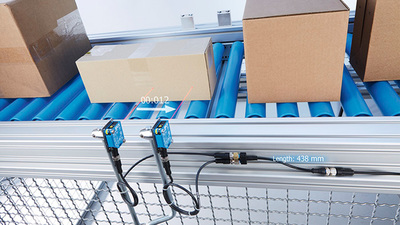 Smart Tasks: Tailor-made information directly from the sensor. Click on the picture to watch video.

Special features of the function blocks that can be selected in the FBF further facilitate PLC programming and also ensure considerably less programming effort, as well as a clear and legible code. The multi-selection option allows for simultaneous reading of several parameters. This eliminates the programming of elaborate sequence chains to read or write the parameters in succession. Enumerators (enums) replace meaningless numbers with names. This not only accelerates the development process as it is no longer necessary to look anything up, but the source code becomes easier to read and also clearer for third parties at a later point in time. This considerably reduces commissioning time.

The Subindex access function serves to reduce data loss and communication length. Instead of complete, complex variables — referred to as records in the IO-Link context — it makes it possible to read out defined sub-variables or change them via a write function in a targeted manner. The entire record therefore does not have to be transmitted back and forth; only a fraction of it must be transmitted, namely the sub-variable. All previously selected variables and parameters can be deselected with only one command with auto-deselection. This accelerates the definition of new read areas in the function block and also makes this easier, since each individual selection does not have to be deleted, making it possible to overlook one.

The Function Block Factory is the first web-based service of its type for facilitating the integration of IO-Link devices into controls. It is characterised by its high availability (24/7 use) as well as application-friendly and safe user guidance, which avoids the need for manual data searches and complexity, reducing the risk of errors. The integration of IO-Link devices into controls is therefore no longer a great challenge: thanks to the FBF, it is nothing more than a simple task for which no special IO-Link knowledge is required.

Global M2M shares its end-to-end IoT solutions for the ANZ market and how users stand to benefit...

It is now common for smart sensors to communicate with superordinate control systems via IO-Link.

Telemetry is an advanced monitoring and analysis system that records data from a remote source,...