A rugged solution for wastewater 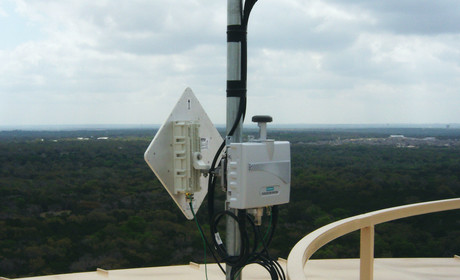 Deep in the heart of Texas, 50 km north of Austin, is historic Georgetown. The once sleepy town’s population has almost doubled over the last 12 years to more than 52,000. According to Ron Marrow, Georgetown Utility Systems’ transmission and distribution supervisor for SCADA, the rapid pace of growth has made providing utility services to the city an increasingly difficult task. He and his team are in charge of all communications and network connectivity across water, waste and electrical infrastructure. Thus, they’ve been heavily involved in ongoing upgrades to meet the needs of the city’s soaring population.

For years, Georgetown Utility Systems used the 900 MHz radio spectrum with SCADA communications to monitor the operations of its water, sewage and electrical distribution systems. However, as Marrow explains, with a coverage area of more than 770 km2, this presented reliability issues, particularly in the summer months.

“Whenever it got hotter than 32°C, communications from a remote wastewater lift station would fail,” he said. “So we’d have to send a technician to take data readings every four hours, to make sure nothing was overflowing.”

Another issue was the star topology of the city’s radio network. “All the remote radios were transmitting back to one central radio,” added Marrow. “If that central radio went down, so would all our communications.”

To alleviate that concern, Marrow and his team deployed a redundant 1 Gbps fibre ring network, with the intention of using its multimegabit bandwidth to eventually enable video surveillance, VoIP and remote on-demand Wi-Fi hotspots for field workers. However, before these services could be implemented, the team had to contend with a more immediate issue: cost-effectively connecting the remote water treatment stations with the city’s new fibre ring.

Because in-ground fibre costs up to $16,000/km, extending the city’s ring to its wastewater lift stations was not economically feasible. After evaluating several options, the project team decided to employ broadband wireless — more specifically, 802.16e WiMAX — using the 4.9 GHz spectrum. WiMAX over the 4.9 GHz band would provide the range needed to reach the stations, but it did require licensing from the Federal Communications Commission (FCC) and accompanying paperwork that Marrow had no idea how to start.

To build out the fibre ring, the Georgetown team deployed scores of RS900G Layer 2 switches from Ruggedcom, a range of harsh environment communications solutions from Siemens. The RS900G is a fully managed Ethernet switch that provides dual fibre-optic Gigabit Ethernet ports with Gigabit uplink ports and 128-bit encryption. “We already had 200 Ruggedcom devices in our network, so it only made sense to keep all the WiMAX components in the family too,” said Marrow. “After all, they had earned their Ruggedcom name by holding up to the harsh conditions of our central Texas summers.”

In working closely with the Georgetown team, Siemens personnel became aware of the issue of extending the fibre’s broadband throughput to the remote sites. The WiMAX technology itself also presented line-of-sight challenges, as wastewater lift stations were in low-lying areas amid Georgetown’s rolling, tree-covered terrain. To address these issues, Siemens recommended Alpha Omega Wireless, a Siemens-certified industrial wireless solution provider based in Austin.

Alpha Omega Wireless compiled a detailed set of requirements from which the company’s experts developed a Ruggedcom point-to-multipoint 4.9 GHz WiMAX solution, as well as a comprehensive deployment and commissioning plan. The company also processed all the paperwork needed for the city’s FCC licence to use the 4.9 GHz spectrum, saving Marrow and his team weeks of time.

“The Ruggedcom system has worked flawlessly,” said Marrow. In addition to eliminating the need to dispatch technicians to wastewater lift stations to log data by hand, Georgetown saved hundreds of thousands of dollars in capital costs by not having to lay fibre in the ground out to the remote sites. The result has been an extremely reliable, future-ready, high-bandwidth wireless network.

Overall, Marrow explains that one of the biggest benefits of working with Siemens and Alpha Omega Wireless was their expertise and collaborative approach to the project. “They worked seamlessly together,” he said. “Through it all, my team and I felt like our backs were covered. No matter what issues might arise, we knew the two companies would respond as one.”

Image: The Ruggedcom point-to-multipoint 4.9 GHz WiMAX solution provides reliable access to the data gathered in the remote water treatment stations and has saved the expense of a wired connection.

The ICP DAS ET-7005 is an Ethernet I/O module with an 8-channel thermistor input and 4-channel...

Two IP67 switches have been added to Turck's Industrial Ethernet range, in both unmanaged and...