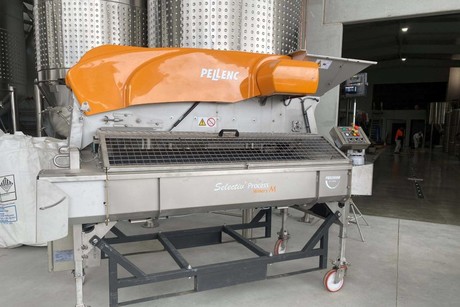 The ABC has reported that a family-owned business in Tasmania is about to open a new winery that will use fully automated processes.

Rainier Roberts from Riversdale Estate said the French automation technology would sort the grapes by using air blasts, allowing them to be harvested and processed within 20 minutes. An optical sorter takes more than 7000 photos per second, and then air blasts remove discoloured berries, sticks and leaves.

The technology from Pellenc will enable Riversdale to sort out different berry colours in the winery quickly, aiming to improve quality.

"The suite of technology here isn't that common — there's only two in Australia, but in terms of the full suite we're the only ones to have it," Roberts said.

The technology will allow Riversdale to double the amount of wine it produces under its own label each year, while continuing to supply other winemakers.

The process also saves some power compared to the old ways. After recognising a demand from consumers for environmentally conscious wine labels, Riversdale aims to be fully solar powered by 2023.

"Solar power will allow us to keep everything, without affecting the environment too much," he said. "Our plans are to put 100 kW in the winery, and that will allow us to be self-sustainable.

Moores Hill in the Tamar Valley in the state's north was the first winery to be 100% solar powered in 2017, storing energy in batteries. Other wineries in Tasmania have also invested in solar power systems.

Paul Smart from Wine Tasmania said automated technology was the way of the future for larger vineyards, but it was not essential to make premium wine.

"There are a lot of small producers out there, and they like the hand element, it brings in staff and they're able to put that into their story," Smart said. But he said automated technology was a major feature at the recent Australian Wine Industry Technical Conference.

A new 3D camera system is said by its makers to imitate human vision to make robotic inspection...