UR still leading cobot market but will face challenges: research 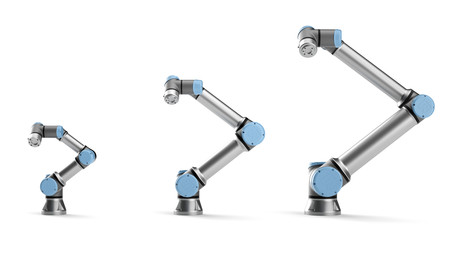 There are well over 50 manufacturers of collaborative robots (cobots) worldwide, but only a handful of these companies have so far deployed cobots on any meaningful level of scale. Tens of thousands of cobots have been sold as of 2019 and earned US$500 million in annual revenue for world markets. In its new Industrial Collaborative Robots Competitive Assessment, ABI Research has found Universal Robots (UR) to be the clear forerunner, particularly in implementation.

“Market leaders in cobots generally have well-developed cobot rosters, in many cases backed up by an ecosystem platform that integrates applications, accessories and end-of-arm-tooling (EOAT) solutions in with the base hardware,” said Rian Whitton, Senior Analyst at ABI Research. With 37,000 cobots sold so far, UR leads, followed by Taiwanese provider Techman with 10,000 and Korea-based Doosan with over 2000. Precise Automation, which uses an advanced direct drive solution to develop faster collaborative robots, was cited as the most innovative of the 12 providers, just edging out Universal Robots, which claimed the overall top spot due to its significant lead in implementation.

There are several companies that are too young to be challenging the dominant parties in the cobot market but are developing new and disruptive technologies that will allow them to rise to prominence in the years to come. Productive Robotics is a case in point. The California-based developer has an arm with in-built vision, seven axes for superior flexibility, long reach and a very affordable price point, but has yet to deploy at scale. Automata, a British company that develops a ‘desktop’ cobot costing less than US$7000, is significantly lowering the barriers to entry for smaller actors and is championing the use of open-source middleware like ROS to program cobots for industrial use cases. Germany-based Franka Emika and Chinese-American provider Aubo Robotics also represent relatively new entrants to the market who are building on the success of Universal Robots and are beginning to compete with them.

Perhaps surprisingly, while the major industrial robotics providers have developed cobot lines, they have generally been less successful in marketing them or gaining market traction relative to the pure-cobot developers. ABI believes this is down to focus. While collaborative robots are valuable, they generally suit deployments and use cases with smaller shipments and a wider variety of small and large end users. For industrial players like ABB, FANUC, KUKA AG and Yaskawa Motoman, their client base tends to be large industrial players who buy fixed automation solutions through bulk orders. Aside from this, all four of these companies are competing extensively for greater shipment figures in China, where the cobot opportunity relative to the market for traditional industrial systems is much less apparent than in Europe or North America. “Though many of the cobots deployed by these companies are impressive, and they have a lot of software services, the high cost and lack of easy use among their systems largely defeat the current value proposition of cobots, making them the laggards in this competitive assessment,” Whitton said.

Looking forward, the larger industrial players are likely to improve their relative position, as future growth in cobots rests on scaling up and large deployments. “Universal Robots, though likely to remain the market leader for the foreseeable future, will be increasingly competing on an even footing with near-peer cobot developers, who are already developing second-generation cobots with significant hardware improvements. Meanwhile, some more innovative companies will be able to accelerate adoption through price decreases, improved flexibility and common platforms to retrofit collaborative capability on industrial robots,” Whitton concluded.

Datalogic has introduced its IMPACT 12.2 software to further enhance the traceability and ease of...

MV systems in manufacturing to approach 100 million by 2025