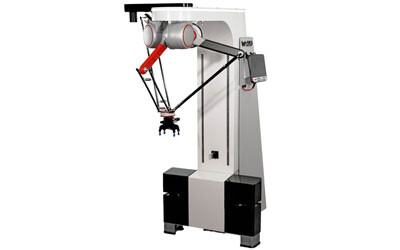 Wyzo — which is described as “the world’s first high-speed pick-and-place sidebot” — is said to be suitable for companies making their first steps into automation, as well as for large manufacturers looking for “unrivalled versatility”.

Claimed to be compact and agile, Wyzo works safely side by side with humans without protective barriers or performance compromises. It also uses a new direct drive concept invented by Genesis Robotics.

The company says this new approach to collaborative production is ideal for lightweight applications in the food and beverage, consumer goods, pharmaceutical, cosmetics, automotive, electrical and electronics sectors.

“Creating Wyzo started with a dream to give every operator out there an assistant for day-to-day tasks on the production floor,” said Frank Souyris, CEO at Wyzo. “Building on 20 years of experience in high-speed delta robots, we are proud to present Wyzo — the fast, compact and flexible sidebot.”

While traditional pick-and-place robots are large and work on fully automated lines separated from operators by protective doors, Wyzo’s safety system allows it to collaborate with humans in close proximity. At the same time, the sidebot finds and picks products at an incredible 80 cycles per minute, with a payload of half a kilogram.

Through its sensor technology, Wyzo constantly monitors its surroundings for the presence of human activity, allowing it to maximise performance when on its own and also to slow to a safe operating speed when a human is in close proximity.

As a result, manufacturers can now enjoy the performance of an industrial robot combined with the versatility and compact size of a cobot, says the company.

At less than 0.5 m2 and just 1.8 m in height, the sidebot fits through standard doors and elevators, offering flexibility with a small footprint. It can easily be moved from one workstation to another, eliminating bottlenecks and enabling fast return on investment.

For manufacturers switching between products, Wyzo is highly compatible with all regular grippers on the market with changeover speeds of less than nine seconds. It also offers integrated pneumatic, electric and vacuum controls.

The company also says that Wyzo’s HMI is simplified for intuitive use by operators with no prior training in automated solutions. Its mobile terminal is said to be as easy to operate as a smartphone and requires neither script nor programming to get Wyzo up and running.

“It is not a mere machine. Wyzo is a co-worker, who is easy to communicate with through a simple interface,” Souyris said. “Maybe the next generation will even have a conversation with its colleagues.

“Regardless of its conversational skills, however, its ability to be effectively integrated into existing production lines to perform pick-and-place tasks flexibly and reliably will certainly put a smile on manufacturers’ faces.

“It is a new benchmark for collaborative production that combines the best of human and machine abilities. We could not be more excited to present Wyzo to our customers.”

MassRobotics has released an interoperability standard to allow autonomous mobile robots from...