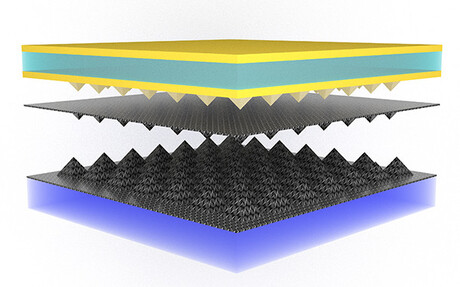 Penn State University in the USA has announced that an international research team has developed ‘electronic skin’ sensors capable of mimicking the dynamic process of human motion. This work could help severely injured people, such as soldiers, regain the ability to control their movements, as well as contribute to the development of smart robotics, according to Huanyu ‘Larry’ Cheng and Dorothy Quiggle, Early Career Professor in the Penn State Department of Engineering Science and Mechanics. Cheng and collaborating researchers based in China published their work in a recent issue of Nano Energy.

“The skin of the human hand is amazing — that’s what we tried to imitate,” said Cheng. “How do we capture texture and force? What about the years of evolution that produced the impressive sensitivity of the fingertip? We’re attempting to reproduce this biological and dynamic process to enable objects to behave similarly to the human hand.”

The dual-mode sensor measures both the magnitude and load of movement, such as the effort of swinging a tennis racquet, as well as rate, duration and direction. The trick was to decouple this measurement and understand how the separate parameters influence each other.

For example, bouncing a tennis ball gently on a racquet requires a different input to serving a ball to an opponent. Those same variables come into play when a person with a prosthetic arm needs to differentiate between handling an egg or carrying a watermelon.

“We can apply these sensors to help people capture the magnitude for pressing, bending and more,” said Cheng. “We can also use these sensors on soft robotics to manipulate delicate objects, like catching a fish, or even in a disaster when they may need to crawl into irregular spaces and move debris.”

The data is informed by synergy created between the piezoelectric and piezo-resistive signals, according to Cheng. Piezoelectric signals measure outside force — such as pressure — to create electrical charge, while piezo-resistive signals mitigate the current. The dual-mode sensors are sandwiched together, with two internal layers of pyramid-shaped microstructures facing one another. The microstructures measure magnitude and duration measurements from the piezo-resistive layer and the dynamic loading rate and direction from the piezoelectric layer. This synergistic effect allows for a high sensitivity over a broad pressure and frequency range, meaning the researchers can precisely measure the force and flexibility needed to imitate specific movements.

“We combined the best of the best models and sensors to create something new,” Cheng said.