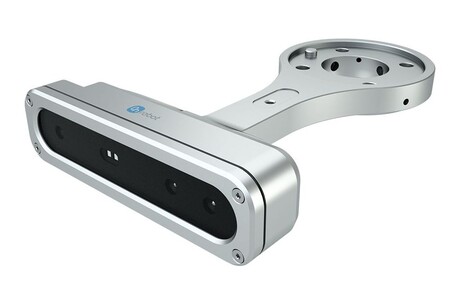 Robotic arms are often tasked with picking items not presented in the same orientation, shape or size. To provide consistent positioning, manufacturers frequently add fixtures, bowl feeders and other hardware, adding cost and complexity to what ends up being rigid applications that lack the ability to easily pick different objects or achieve quick changeover times.

Now robot accessory manufacturer OnRobot has produced a 2.5D vision system that can be mounted on a robotic arm and can process object recognition in real time.

“A significant part of our customer base does not want to be tied to a fixed incoming position of a product they want to pick,” said Enrico Krog Iversen, CEO of OnRobot. “They would love to eliminate complicated, bulky and expensive part feeders and fixtures to achieve this, but until now, vision systems have felt out of reach. Our new Eyes vision system changes all that.”

Unlike previous vision systems, Eyes just needs to take a single image for calibration and part recognition, and has automatic focus to work at different distances within the same application.

Eyes is designed for sorting a wide variety of objects or for CNC machine tending with metal parts that are defined by outer shape, as well as many other pick-and-place applications where orientation is important. Eyes also offers depth perception with its 2.5D vision.

“2.5D is rapidly emerging as the perfect technology for vision-guided applications,” Iversen said. “Compared to 2D it adds not only length and width but also height information for the specific part, which is ideal when objects may vary in height or if objects must be stacked.”

Eyes can be easily mounted on the robot wrist or externally, and integrates seamlessly with all leading collaborative and light industrial robot arms through OnRobot’s One System Solution, a unified mechanical and communications interface based on the company’s Quick Changer, now an integrated part of all OnRobot products.

The new vision system directly interfaces with other OnRobot devices making it easy to use Eyes together with any of OnRobot’s grippers. With a dual set-up, using a dual Quick Changer, the gripper’s tool centre point (TCP) can be automatically configured by Eyes, eliminating any potential conflict between different software packages from different tool vendors. The optimal mounting depends on the application. Some of the advantages of having Eyes mounted externally are not having to worry about cables running alongside the robot and the ability to optimise cycle time, as Eyes can take the picture and process this, while the robot is doing another operation.

Robot-related services powered by cloud computing are predicted to reach US$157.8 billion in...