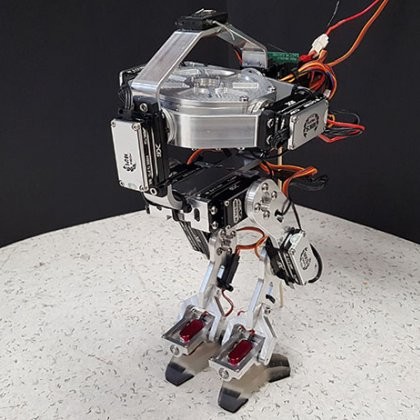 Recent advances in the development of bipedal walking robots are making them more viable, but cost and robustness will continue to be a constraint in the near future. The complexity of these machines increases their cost and their propensity to become damaged. But research is underway at University of Queensland to develop a system to bring a more affordable option to the market.

“I always wanted to build the amazing walking machines you see in science fiction and I always wondered why they were so hard to build,” Pounds said.

“Walking in robots is very complex, and a lot of research and funding has gone into dealing with this complexity,” she continued. “Famous walking robots such as those developed at Boston Dynamics, Schaft and Honda are expected to have price tags in excess of one million dollars.

“Our approach promises to reduce the cost to only a few thousand dollars.”

Her system uses control moment gyroscopes to keep the robot upright, independently of where it places its feet, which allows more affordable sensors and actuators to be used.

“We are starting by building very small chicken-sized robots to prove the underlying science and solve engineering problems, before moving up to larger human-sized platforms that can carry useful payloads, like your weekly shopping,” Pounds said. “From there, we could size the robot up or down to suit the particular application and need — from something the size of a rat, up to a human-piloted machine as big as a mining haul truck.”

Dr Pounds said while complex walking machines are available, they are often expensive and have limited applications.

“A large fraction of their cost comes in providing capabilities beyond simple walking, such as off-road terrain handling,” she said. “However, there are many applications that could use walking machines — such a grocery delivery, compound security and human mobility — that only need to deal with simpler terrain.”

It’s the second time in three years the lab has taken out the top prize, beating out over a dozen other Australian institutions.