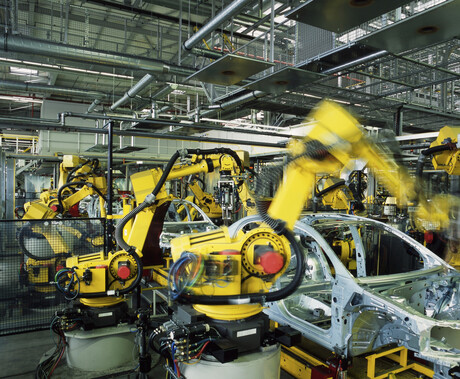 Robotics company KUKA has announced that it has won a contract to supply Mercedes-Benz with technology for body-in-white production.

Body in white is the stage in automobile manufacturing in which a car body’s frame has been joined together — before the engine and anything else has been installed, or the body painted.

KUKA has received an order from Mercedes-Benz for the engineering and construction, as well as the assembly and commissioning, of several body-in-white production lines on which various vehicle models will be produced.

Out of four packages offered for the essential components of a body shop line, KUKA was able to supply all four packages. KUKA says is using its extensive technological expertise and several hundred KUKA industrial robots for the premium car maker’s flexible production strategy.

“We are proud that KUKA is convincing here with its comprehensive expertise and decades of experience in the automation of the automotive industry,” said Gerald Mies, CEO of KUKA Systems.

This latest contract follows on from KUKA’s success in winning another major order from Volkswagen for body-in-white production of its fully electric vehicle, the ID.Buzz.