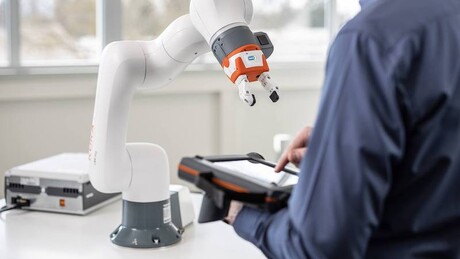 Kuka has released a new operating system that the company says will “mark the beginning of a new era in robotics”.

Claiming it is “as easy to use as a smartphone”, Kuka launched the new operating system at Hannover Messe, the annual industrial trade show in Germany, where the company gave audiences the first look at the OS, called iiQKA.OS.

The company added that the new operating system will form the base of an entire ecosystem, providing access to a powerful selection of components, programs, apps, services and equipment that are easy to install, operate and use to enhance the system.

This iiQKA Ecosystem based on iiQKA.OS will make it possible for newcomers to implement automation without specialised training, while greatly improving and simplifying the process for experts.

“Automation is one of the megatrends of our time. That is why Kuka aims to make robot-based automation available to everyone as part of its ‘Mission 2030’,” said Kristina Wagner, Kuka Vice President Corporate Research and Director of the Robot X-perience Program.

This is where the iiQKA.OS operating system, supported by the iiQKA Ecosystem, comes into play. It is based on a modern and modular software architecture with usability and intuitive, user-friendly features built in — and is said to offer a quick introduction to robotics for beginners and a significant improvement in automation for experienced users.

Software is more important than ever for the user-friendliness of an entire robot system. This requires an operating system that is intuitive to use and offers access to an ecosystem of components, programs, apps, services and accessories.

Kuka’s collaborative robot, LBR iisy, will be the first of its kind to run exclusively on the new operating system supported by the iiQKA Ecosystem — in combination with the KR C5 micro robot controller and the company’s new smartPAD pro operator device.

Over the next few years, the goal is for every Kuka product to be equipped with the iiQKA.OS and iiQKA Ecosystem. Starting with selected partners, the iiQKA Ecosystem will also grow to become an open network of partners and developers who provide hardware and software — for example, a selection of grippers or other end-of-arm tooling, camera systems for visual recognition, safety sensor technology or application-specific programs.

Built on a Linux kernel, the entire architecture of the new OS is designed for rapid development and maximum user-friendliness. The OS will also support the existing Kuka Robot Language (KRL). This will allow existing Kuka customers who have expertise with Kuka.SystemSoftware to migrate smoothly to iiQKA.OS in the coming years and continue to use workflows and codes.

Nissan is utilising new technologies that include robotic dual-sided dieless forming for body...

Mobile Industrial Robots has reported a 55% increase in AMR sales in Q1 2021, which the company...

SICK has launched its first vision camera with a pre-installed deep learning app on board.

Machinery compliance: ensuring your safety system is up to spec

The end of just-in-time for electronics manufacturing