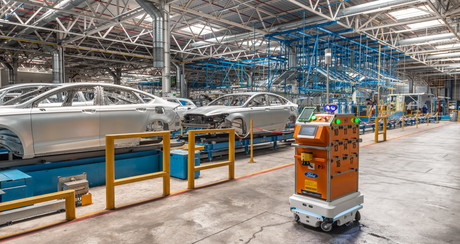 Like so many software developers, Elias Sorensen has been studying AI. Now he and his 10-member team are teaching it to robots.

When the AI specialists at Mobile Industrial Robots, based in Odense, Denmark, are done, the first graduating class of autonomous machines will be on their way to factories and warehouses, powered by NVIDIA Jetson Xavier NX GPUs.

“The ultimate goal is to make the robots behave in ways humans understand, so it’s easier for humans to work alongside them. And Xavier NX is at the bleeding edge of what we are doing,” Sorensen said.

MiR’s low-slung robots carry pallets weighing as much as 1000 kg. They sport LiDAR and proximity sensors, as well as multiple cameras the team is now linking to Jetson Xavier GPUs.

The new digital brains will act as pilots. They’ll fuse sensor data to let the bots navigate around people, forklifts and other objects, dynamically re-mapping safety zones and changing speeds as needed.

The smart bots use NVIDIA’s DeepStream and TensorRT software to run AI inference jobs on Xavier NX, based on models trained on NVIDIA GPUs in the AWS cloud.

MiR chose Xavier for its combination of high performance at low power and price, as well as its range of software.

“Lowering the cost and power consumption for AI processing was really important for us,” Sorensen said. “We make small, battery-powered robots and our price is a major selling point for us.” He noted that MiR has deployed more than 3000 robots to date to users such as Ford, Honeywell and Toyota.

The new autonomous models are working prototypes. The team is training their object-detection models in preparation for first pilot tests.

This is MiR’s first big AI product, but not its first ever. Since November, the company has shipped smart, standalone cameras powered by NVIDIA’s Jetson Nano GPUs. The Nano-based cameras process video at 15 frames per second to detect objects. They’re networked with each other and other robots to enhance the robots’ vision and help them navigate.

Both the Nano cameras and Xavier-powered robots process all camera data locally, only sending navigation decisions over the network. “That’s a major benefit for such a small, but powerful module because many of our customers are very privacy minded,” Sorensen said.

MiR developed a tool its customers use to train the camera by simply showing it pictures of objects such as robots and forklifts.

The company hopes its smart robots will be equally easy to train for non-technical staff at customer sites. But here the challenge is greater. Public roads have standard traffic signs, but every factory and warehouse is unique with different floor layouts, signs and types of pallets.

The company is currently investigating NVIDIA’s Isaac platform, which supports training through simulations.

MiR is outfitting its industrial robots for AI

The journey into the era of autonomous machines is just starting for MiR. Its parent company, Teradyne, announced in February it is investing $36 million to create a hub for developing collaborative robots in Odense as part of a partnership with MiR’s sister company, Universal Robotics.

Market watchers at ABI Research predict the cobot market could expand to $12 billion by 2030. In 2018, Danish companies including MiR and Universal captured $995 million of that emerging market, according to Damvad, a Danish analyst firm.