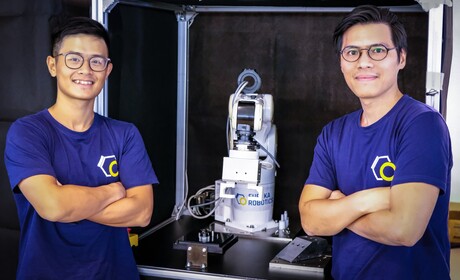 Eureka Robotics, a tech spin-off from Nanyang Technological University, Singapore (NTU Singapore), has developed a technology called Dynamis that makes industrial robots more nimble and gives them touch sensitivity close to that of human hands, meaning they are able to manipulate tiny glass lenses, electronics components or engine gears that are just millimetres in size without damaging them.

This proprietary force feedback technology developed by the NTU scientists was previously demonstrated by the ‘Ikea Bot’, which assembled an Ikea chair in just 20 minutes. The breakthrough was first published in the scientific journal Science in 2018 and went viral on the internet when it could match the dexterity of human hands in assembling furniture.

NTU Associate Professor Pham Quang Cuong, co-founder of Eureka Robotics and Deputy Director of the Robotics Research Centre at NTU’s School of Mechanical and Aerospace Engineering, said the team has since upgraded the software technology, which will be made available for a large number of industrial robots worldwide by Denso Wave, part of the Toyota Group.

Those purchasing the latest robots sold by Denso Wave will have an option to include this new technology as part of the force controller, which reads the force detected by a force sensor on the robot’s wrist and applies force accordingly: apply too little force and the items may not be assembled correctly, while applying too much force could damage the items.

Mastering touch sensitivity and dexterity like human hands has always been the holy grail for roboticists, said Assoc Prof Pham, as the programming of the force controller is extremely complicated, requiring long hours to perfect the grip just for a specific task.

“Today, Dynamis has made it easy for anyone to program touch-sensitive tasks that are usually done by humans, such as assembly, fine manipulation, polishing or sanding,” explained Assoc Prof Pham. “These tasks all share a common characteristic: the ability to maintain consistent contact with a surface. If our human hands are deprived of our touch sensitivity, such as when wearing a thick glove, we would find it very hard to put tiny Lego blocks together, much less assemble the tiny components of a car engine or of a camera used in our mobile phones.”

Hiroyasu Baba, Manager of the Robotics Business Unit Product Planning Department at Denos Wave, said: “Due to its high basic performance and openness, Denso robots are the preferred choice by companies and universities … NTU Singapore and Eureka Robotics have also been using Denso robots for this reason.

“Because of this relationship, joint development began naturally, and we were able to launch this product smoothly. The technology … is becoming more and more important in the practical use of robotics. Thanks to the development capabilities of Eureka Robotics, the system is advanced yet easy to use and light enough to be integrated into our standard robot controllers.”

Known as ‘Force Sensor Robust Compliance Control’, the Dynamis software requires only a single parameter to be set, which is stiffness of the contact — whether it is soft, medium or hard. Despite its simple set-up, it is said that it can outperform conventional robotic controllers, which require a large amount of expertise and time to fine-tune.

This backbone technology was further improved and was first deployed in Eureka Robotics’ custom-built robots, such as Archimedes, which can handle fragile optical lenses and mirrors with human-like dexterity, now used by multiple companies worldwide.

Current robots in the market have either high accuracy but low agility (where robots perform the same movements repeatedly such as in a car factory) or low accuracy but high agility (such as robots handling packages of different sizes in logistics).

By deploying this technology, robotics engineers can now imbue robots with both high accuracy and high agility (HAHA) on a large scale, paving the way for industrial applications that were previously very difficult or impossible to implement, such as handling and assembly of delicate, fragile objects such as optical lenses, electronics components or engine gears.