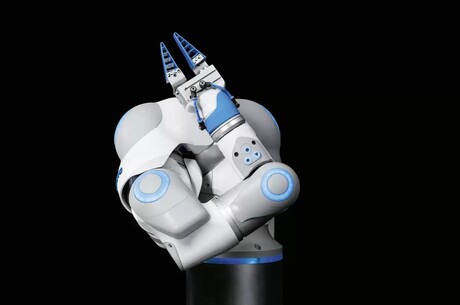 Hardly any industrial market segment will grow as rapidly over the next few years as human–robot collaboration. Cobots relieve employees of particularly strenuous or monotonous tasks, giving them new levels of freedom and making their work easier and healthier.

According to Festo, no other technology has such a sensitive and flexible approach to human-robot collaboration as pneumatics. Now Festo has announced the Festo Cobot, which owes many of its advantages, such as its sensitivity, weight and value for money, to the benefits of pneumatics.

The company says direct drives in the articulated joints are very cost-effective and particularly lightweight because, unlike electric solutions, no heavy gear units or expensive force-torque sensors are required.

The Festo Cobot is said to even make using cobots cost-effective for small and medium-sized companies, which often rely on manual work processes. Its flexible application options mean that small batch sizes or work steps can now be processed automatically.

Festo says its pneumatic cobot will be cheaper than electric cobots in the same class and will provide value for money in its main application area of small parts handling with payloads of up to 3 kg.

“When it goes on sale in 2023, the Festo Cobot will set new standards in human–robot collaboration with its ease of use,” said Dr Frank Melzer, member of the management board for product and technology management at Festo.

The Festo Cobot consists of the hardware itself, a handheld module and the Robotic Suite — software for intuitive commissioning and programming. This package makes it possible to commission and program the cobot in less than an hour. Prior knowledge of robotics is not required either, because the self-explanatory Robotic Suite software contains clearly visualised and standardised function blocks. Pneumatic drives enable the robot arm to be guided by hand easily and without any resistance so that waypoints or paths can be taught quickly and precisely.

For small and medium-sized companies in particular, cobots are only attractive if they can adapt quickly to take on a new task and are not just permanently used for the same purpose. The Festo Cobot meets this requirement as it doesn’t require an additional control cabinet that can be difficult to connect and cumbersome.

The compact controller that is integrated in the cobot’s base makes it particularly flexible. Simple connections also allow it to be used ad hoc without long changeover times. Common bus standards enable fast connection to higher-order controllers. It also requires less space.

The Festo Cobot weighs in at well under 20 kg so that it can be deployed quickly and flexibly at other locations. With a length of 670 mm, it is just like a human arm and has the right reach for it to be perceived as a helping third hand when working with a member of staff. It moves — like a real colleague — within a manageable radius.

“Thanks to precise pressure regulators in the articulated joints, the robot recognises when it is being touched and responds with appropriate safety functions,” said Christian Tarragona, head of robotics at Festo.

Engineers developed the artificial skin with a processing system based on synaptic transistors,...