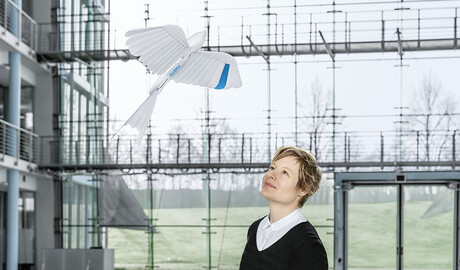 Automation technology company Festo spends a considerable amount of its robotics research on technology that mimics the behaviour of animals in the natural world. Now it has created a robotic bird that accurately mimics the natural flight mechanisms — and therefore the agility — of birds.

The company’s BionicSwifts are agile, nimble and can even fly loops and tight turns. The five artificial swallows can also move in a coordinated and autonomous manner in a defined airspace by interacting with a radio-based indoor GPS.

When designing the robotic birds, the focus was on the use of lightweight structures, just like their biological role model. This is because the same applies in engineering as it does in nature: the less weight there is to move, the lower the use of materials and energy consumption. And so, with a body length of 44.5 cm and a wingspan of 68 cm, the bionic birds weigh just 42 g.

To execute the flight manoeuvres as true to life as possible, the wings are modelled on the plumage of birds. The individual lamellae are made of an ultralight and flexible but very robust foam and lie on top of each other like shingles. Connected to a carbon quill, they are attached to the actual hand and arm wings as in the natural model.

During the wing upstroke, the individual lamellae fan out so that air can flow through the wing. This means the birds need less force to pull the wing up. During the downstroke, the lamellae close up so that the birds can generate more power to fly. Due to this close-to-nature replica of the wings, the BionicSwifts have a better flight profile than previous wing-beating drives.

Functional integration in the tightest of spaces

The bird’s body contains compact construction for the wing-flapping mechanism, the communication technology, the control components for wing flapping and the elevator, the tail. A brushless motor, two servomotors, the battery and the gearbox, as well as various circuit boards for radio, control and localisation, are all installed in a very small space.

The intelligent interaction of motors and mechanics allows, for example, the frequency of the wing beat and the elevator’s angle of attack to be precisely adjusted for the various manoeuvres.

Coordination of flight manoeuvres by GPS

Radio-based indoor GPS with ultra-wideband (UWB) technology enables the coordinated and safe flying of the BionicSwifts. For this purpose, several radio modules are installed in one room. These anchors then locate each other and define the controlled airspace. Each robotic bird is also equipped with a radio marker. This sends signals to the anchors, which can then locate the exact position of the bird and send the collected data to a central master computer that acts as a navigation system.

This can be used for route planning, so that preprogrammed routes give the birds their flight path. If the birds deviate from their flight path due to sudden changes in environmental influences such as wind or thermals, they immediately correct their flight path themselves and intervene autonomously in this situation — without a human pilot. Radio communication enables exact position detection even if visual contact is partially hindered by obstacles. The use of UWB as radio technology guarantees safe and trouble-free operation.

The intelligent networking of flight objects and GPS routing makes for a 3D navigation system that could be used in the networked factory of the future. The precise localisation of the flow of materials and goods could, for example, improve process sequences and foresee bottlenecks. Moreover, autonomous flying robots could be used to transport materials, for instance, and thus optimise the use of space within a factory with their flight corridors.

The video below is well worth watching.