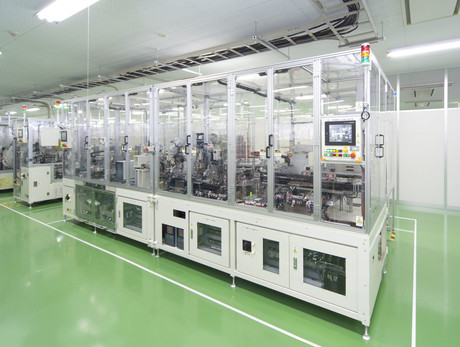 Mitsubishi Electric’s Kani factory in Nagoya, Japan, which produces motor starters and contactors, was facing a number of significant challenges, not least the sheer number of product variations and possible configurations in its product range — approximately 14,000. Demand from customers for greater choice had served to dilute the volumes of each particular product, despite overall product quantities increasing substantially.

In the past, manual production at the Kani factory had given way to totally automated assembly lines, which were ideal for mass production with few product variations where high yields could be realised at high speed. However, one problem lay with the fact that many individual components were required to be in stock and ready for the manufacturing process — without which the lines would not be able to run for any appreciable length of time.

For various reasons, substantial numbers of assembly lines had been optimised to produce a limited range of products, and these would come to a standstill when components ran out. In such a scenario it became difficult and uneconomical to produce small batches.

The solution was to employ engineering know-how built up over many years and combine this with a vision of integrated manufacturing — known as the Mitsubishi Electric e-F@ctory concept.

The initial major challenge was to find the root cause of any inconsistencies. This task involved several approaches, from analysing existing data or collecting new data sets for fresh eyes to review, to looking for links between data that on the surface could appear unlinked. Studying existing processes, as well as the methodology, revealed that natural, normal, organic growth in the production process had inadvertently led to inefficiencies.

Looking for a resolution to this issue led to a re-evaluation of the need for 100% automated lines, which were not necessarily the most efficient. Restoring some human elements to the process could potentially reduce manufacturing anomalies.

Further observations revealed that the automated parts feeding of some larger components not only created a bottleneck, but led to the parts feeders consuming large volumes of space — which could, under some conditions, result in minor damage to the components. The damage was not enough to cause an issue, but enough that the engineers were dissatisfied with the quality level being achieved.

Conversely, the automation of some tasks which had, in the past, seemed impossible, now looked possible through a combination of technologies. An example of this thinking concerned the misalignment of certain screws during the assembly process. The automation system, unaware of the misalignment, would try to insert the screw and cause damage to the entrance of the hole.

Two technologies helped to overcome this problem: robotic vision and combining rotational drives for inserting the screws using torque sensors. As a result, the hole can now be located easily and aligned correctly every time. The torque sensor confirms the absence of misalignment and that the screw is tightened to the correct level. The increased use of vision systems, checking for correct assembly and alignment, has also helped to increase the number of right-first-time products.

Another, simpler idea was to etch a matrix code on the body of each product and track it through the various stages. Now, as the product arrives at a workstation, its code is read and the appropriate processes and parts applied. At the end of the manufacturing cycle, each product then has a traceable manufacturing history, making it entirely possible to track the history of individual issues.

By redesigning the process and reintegrating the human element, a single line, which comprised two 35 m-long segments occupying some 280 m2, has been reduced to a cell of just 44.1 m2. This 84% reduction in space means that the productivity of each square metre of production hall has been increased through greater utilisation. Even though a single new cell cannot produce the same volume and speed of units as the original fully automated line, it is now possible to deploy up to 6 cells in almost the same space. In turn, total productivity density is much higher due to three key factors: a wider variety of products can be manufactured in smaller batches; one stoppage does not halt the whole of production; and the total number of production lines has increased.

The end result, much to the satisfaction of the Mitsubishi Electric team at the Kani factory, is effective optimisation of both machine and human resources, as well as the production process and space — a true productivity gain.

Image caption: Redesigning the process has led to 84% more floor space at the Kani factory.

The OnRobot food-grade soft gripper is able to pick a wide array of irregular shapes and delicate...

LogiDrive drive units consist of a synchronous motor, a two-stage helical bevel gear unit and a...

The BML absolute magnetic encoder is designed for any application where high absolute accuracy of...