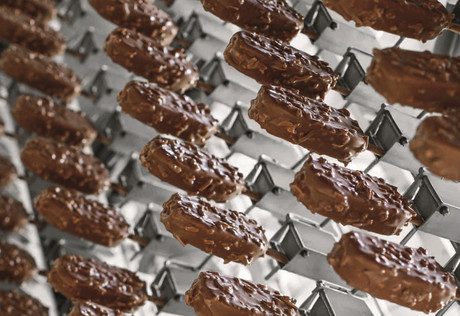 Ice-cream is refreshing, and with its proteins and carbohydrates is considered a source of energy. However, it also takes a lot of energy to mix ingredients like milk, dairy chocolate, sugar and vanilla beans into the finished product. Electricity and compressed air play an important role in the thermal and kinetic processes for everything from mixing and extruding the ingredients, deep-freezing to -25°C, dipping into various chocolate coatings through to final packaging. Energy efficiency is therefore right at the top of Unilever’s list of priorities. As part of the Unilever Sustainable Living Plan, this global corporation has succeeded in saving more than €150 million in energy costs from efficiency improvements in production alone since 2008.

In the area of pneumatics the use of innovative developments offers the potential to save energy and thereby lower costs. In the Unilever plant in Heppenheim, Germany, the MSE6-E2M energy efficiency module from Festo has recently been deployed to reduce the compressed air consumption of a plant manufacturing Magnum ice-creams. Unilever and Festo worked together closely to get this prototype of the energy efficiency module ready for series production. This process also showed that it is not just in the field of energy consumption that less is more.

The Heppenheim factory is one of the main Unilever production locations for ice-cream. These include products of the well-known Wall’s brand including Magnum, Feast, Viennetta and Carte d’Or. High production quantities form the basis for supplying other parts of the European market. Just one of the five Magnum production lines in Heppenheim produces more than 20,000 ice-creams on a stick per hour. This requires a lot of energy. In order to reduce the compressed air consumption of the pneumatic components, the ability to visualise and measure the compressed air consumption was of huge importance to Unilever.

Previously, the consumption on the individual production lines had not been determined. As part of the Unilever Sustainable Living Plan there had already been successes in other areas of the plant. Energy-intensive geared motors were replaced with more efficient ones, achieving energy savings of up to 60%. Numerous 18 kW ventilators in the cooling tunnels, which previously ran for 24 hours in continuous operation, were also converted to frequency converters with variable torque loads, lowering the energy consumption of the ventilators by around 40%.

Alexander Hemmerich, Automation Engineer at the plant, along with his team, took the decisive step towards lowering compressed air consumption with the introduction of the MSE6-E2M energy efficiency module from Festo.

“The energy efficiency module gave us the opportunity to see the amount of compressed air we were using during operation of a line,” explained Hemmerich. “In addition, we were able to determine how the compressed air requirement developed when we switched off individual consumers. We were thus able to locate leaks and eliminate unnecessary consumption.”

One of the core functions of the MSE6-E2M is the automatic shutoff of the compressed air in standby mode, which made it possible to establish how quickly the system empties. The MSE6-E2M module immediately reports an unusually quick drop in pressure to the system controller.

At the same time, the automatic pressure shutoff function prevents further compressed air consumption while the system is not in operation. Due to its onboard intelligence and the specific model for operating the compressed air systems, the MSE6-E2M independently identifies when a system is in production and when it is at standstill. At Unilever, however, they decided to use the alternative option to operate the MSE6-E2M via the system controller so that all information is merged centrally.

Now, with the new condition monitoring for the pneumatic components of his Magnum machine, Alexander Hemmerich has continuous process-relevant data. The MSE6-E2M regularly exchanges important measurement parameters — such as flow, pressure and consumption — with the machine controls via Profibus.

“We’ve been able to reduce compressed air consumption on the Magnum production system step by step with the new energy efficiency module,” he said. “And the Profibus connection had the advantage that we did not have to add any more cables when converting our existing systems.”

The Magnum line at Unilever provided an ideal environment to field test the MSE6-E2M prototype. The pilot use in the Heppenheim plant and the close cooperation with Festo developers showed what daily operation would be like. While the first version of the energy efficiency module still had I/O slots, the final MSE6-E2M uses a Profibus interface. The exhaust valve of the first product generation was also dropped. It was more important to keep the energy efficiency module compact, especially given the limited installation space of existing systems. Thus the MSE6-E2M was designed on the basis of a combination of pressure and flow sensor, shut-off valve and fieldbus node.

The OnRobot food-grade soft gripper is able to pick a wide array of irregular shapes and delicate...

LogiDrive drive units consist of a synchronous motor, a two-stage helical bevel gear unit and a...

The BML absolute magnetic encoder is designed for any application where high absolute accuracy of...