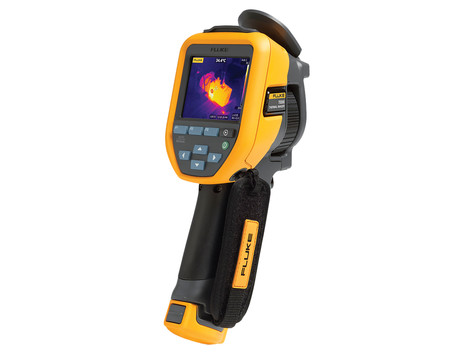 Today’s thermal imagers are rugged, easy to use, and much more affordable than even just a few years ago. They have become a realistic solution for everyday electrical maintenance.

To use them, a qualified technician or electrician points the thermal imager at the equipment in question and scans the immediate area, looking for unexpected hot spots. The imager produces a live image of the heat emitted from the equipment and with the quick squeeze of the trigger, a thermal image is captured.

There are two things that affect the reliability of a thermal image measurement:

Loading: The electrical equipment being inspected must be under at least 40 % of nominal load in order for the thermal imager to detect problems. Maximum load conditions are ideal, if possible.

To detect a phase imbalance, capture thermal images of all electrical panels and other high load connection points such as drives, disconnects, controls, and so on. Wherever you discover higher temperatures, follow that circuit and examine associated branches and loads. Compare all three phases side-by-side and check for temperature differences. A cooler-than-normal circuit or leg might signal a failed component. More heavily loaded phases will appear warmer. Hot conductors may be under-sized or overloaded. However, an unbalanced load, an overload, a bad connection, and harmonics can all create a similar pattern, so follow up with electrical or power quality measurements to diagnose the problem.

Look for connections that have higher temperatures than other similar connections under similar loads. Higher temperatures could indicate a loose, over-tightened, or corroded connection with increased resistance. Connection-related hot spots usually, but not always, appear warmest at the spot of resistance, cooling with distance from that spot. In some cases a cold component is abnormal due to the current being shunted away from the high-resistance connection. You may also find broken or undersized wires or defective insulation.

If a fuse shows up hot on a thermal scan, it may be at or near its current capacity. However, not all problems are hot. A blown fuse, for example, would produce a cooler than normal temperature.

For oil-filled transformers, use a thermal imager to look at high- and low-voltage external bushing connections, cooling tubes, and cooling fans and pumps, as well as the surfaces of critical transformers. Keep in mind that like an electric motor, a transformer has a maximum operating temperature that represents the maximum allowable rise in temperature above ambient.

Beyond the above engineering applications, the emergency services are among the more familiar users of thermal detection cameras today. The technology is deployed regularly in scenarios including firefighting, night-time police pursuits, and disaster response search and rescue.

However, there are a number of other widespread uses of thermal imaging cameras today that may be less obvious. In this section, we’ll look briefly at some of the more common scenarios.

Thermal imaging is often used in remotely piloted drones (UAVs), greatly enhancing general recon capabilities in dangerous or difficult-to-observe conditions. In hobbyist drones, thermal imaging can be a great asset to photographers for a wide range of purposes, while UAV thermal imaging is also highly beneficial to emergency response units, search and rescue teams, and in tactical military applications.

Thermal imaging not only helps firefighters to locate survivors in low-visibility conditions where dust, fog, ash and other contaminants reduce visibility, it can also help detect hotspots, further potential sources of ignition, or indicate the presence of still-burning fires which may be originating from unexpected locations (such as underground or within cavity walls, for example).

There are a plethora of ‘thermal’ and ‘infrared’ photo apps available for Apple iOS and Android devices these days. However, they’re pretty much all just simulations; standalone apps don’t really do much besides putting a fancy filter on your phone camera, effectively mimicking the overall look of thermal detection imaging.

For a real experience of thermal imaging on a smartphone, you’ll need to buy an auxiliary thermal camera device that can be attached to the handset and used in conjunction with a dedicated app for the hardware.

Wildlife photography, animal tracking and environmental monitoring are all common uses of thermal imaging technology today. IR cameras equipped with smart sensors can be set up and left unmanned in natural habitats, triggering automatically in the presence of nocturnal or otherwise hard-to-spot wildlife. This enables far more comprehensive monitoring of species and behaviours in some regions than has previously been possible.

In addition, enthusiast spotters and trackers frequently rely on thermal detection to help locate warm-blooded animals in poor visibility, to bypass visual camouflage conditions, or to remain aware of non-targets in hunting or development areas which may otherwise be at risk of harm.

There are some very important marine application of thermal imaging, not least as a significant boost to collision detection systems when sailing at night, in fog, or during severe weather. While underwater thermal imaging is rather limited in its effectiveness (even with the most advanced technologies), it’s not unusual today to find heat detection cameras manufactured to marine grade specifications and mounted in multiple positions aboard seagoing vessels of all sizes.

Almost all business premises today deploy security camera technologies in one form or another. In recent years, it has become increasingly standard practice to rely on thermal imaging surveillance equipment for the best possible results in terms of protection, identification and return on investment.

Thermal security cameras reliably perform very well in low light and poor visibility areas, as well as providing the ability to strip away much of the visual camouflage — such as dense foliage — that’s often found close to offices and warehousing. In addition, thermal imaging CCTV cameras are usually bundled with smart sensors and advanced analytics technology, helping to reduce the number of false alarms.

Finally, heat detection-based systems are often cheaper to install and run long-term than standard CCTV setups, which need to be placed along every available line of sight in order to be fully effective — and which frequently require costly additional lighting to be rigged nearby in order to provide even basic functionality.

The key difference is that night vision cameras, of the type seen in dozens of films (usually characterised by a grainy green-and-white night-time display), rely on there being just the right amount of ambient light present to amplify what little it detects. For obvious reasons, the sensor can’t cope with too much light — but many people don’t realise that in a completely dark environment, night vision technologies can’t outperform a human eye either.

Many night vision cameras are therefore equipped with an additional infrared illumination function, in order to provide a greater wavelength of amplifiable electromagnetic signals to help the sensor out in very murky conditions. These are invisible to the naked eye, but can easily be detected by anyone else using night vision; not a problem in many applications, but far from ideal in many military or surveillance uses.

Many current thermal imaging cameras are certified specifically for industrial use, with various different configurations and manufacturing standards available in the ANZ market to suit a range of particularly challenging applications and environments. Examples include cameras certified for use in areas subject to explosive gasses; in below-ground applications such as mining; or around high volumes of airborne dust particles found in industries like sugar production and grain-handling.

If you’re likely to need a specific certification for your industrial infrared camera use, always check with suppliers and consult manufacturing guidelines to confirm that all relevant standards — such as ATEX and IECEx approval for safe use in Zone 1 explosive atmospheres — have been met.

With so many varieties, designs and sensitivities of thermal imaging cameras available, it’s important to know exactly what it is you’re shopping for before deciding on a specific product or accessories.

RS Components has an extensive range of thermal imaging cameras that come in a variety of ergonomic designs, and offer a range of thermal sensitivities, making them a valuable companion to the service and maintenance engineer and beyond.

Infrared temperature sensors can be used to detect people with a symptom such as fever and...

Within the chemical, pharmaceutical and process technology industry, system availability is...