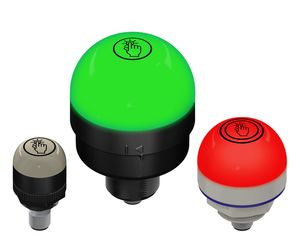 Banner Engineering has introduced its next-generation touch buttons for its K30, K50 and K70 multicolour indicators and pick-to-light sensors. Employing smart electric field sensing, the next-generation touch buttons provide high immunity to false triggering caused by the build-up of detergents, oils and other foreign materials, as well as exposure to direct water spray.

Featuring a 70 mm touch dome with a 30 mm base, the K70 touch is optimal for larger industrial applications in addition to jobs that require more visibility. The K70 is available in nine colour options and one-, two- and three-colour models for flexible performance.

The next-generation K30 and K50 offer flexible communication and simplified set-up of a single device or multipoint applications. The K50 is available in one-, two- and three-colour models, while the K30 is available in one- and two-colour models. FDA models are also available, which are constructed from FDA-grade material and fully encapsulated for use in food and beverage applications.

In addition to high immunity, next-generation K30, K50 and K70 indicators are ergonomically designed to eliminate hand, wrist and arm stresses associated with repeated switch operation, requiring no physical force to operate. The indicators can also be easily actuated with bare hands or in gloves.

Momentary and latching versions are available. Momentary configurations remain activated as long as touch is present, while latching models start up inactive and toggle between activated and not activated on successive touches. All models feature fully encapsulated IP67/IP69K construction for optimal performance in high-pressure washdown environments.

The DB Ultimate range of distribution boards is built for compatibility with Siemens circuit...

I am interested in Banner Engineering K30, K50 and K70 touch buttons .

Complete the form and a supplier representative will be in touch. 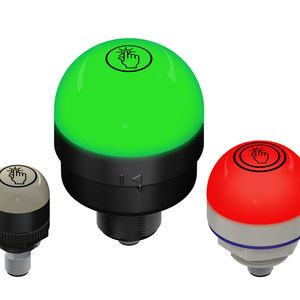 How to select and use COTS components for space applications