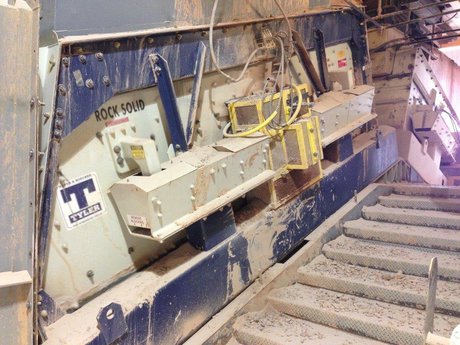 Maintenance represents a significant proportion of overall operating costs in the mining and quarrying sector. As a result, mining and quarrying organisations are now increasingly looking to contain and reduce costs on machinery such as vibrating screens in order to sustain profitability, primarily through improvements in machine performance, reliability and efficiency.

In many instances, the key to achieving these goals lies not just in the performance of large machinery, but also in the smaller components, including bearings and seals. If these essential but frequently overlooked components fail to function, then overall system failure and downtime is inevitable. Heavy loads and harsh environmental factors place extreme demands on vibrating screens and their moving components. As a result, frequent and/or unexpected component failures can lead to costly maintenance situations, with unplanned downtime and loss of valuable productivity.

A major copper mine in Arizona was experiencing a series of costly bearing failures on the vibrating screens operating at its crusher plant. The failures were occurring every 5000 to 6000 hours due to a lack of (or ineffective) lubrication or contamination, and they had become so routine that the mine was scheduling a replacement or rebuild of each bearing assembly in the screen every 7500 hours as part of a time-based preventive maintenance plan.

Upgraded SKF Explorer bearing steel is manufactured with a patented heat treatment to increase the material hardness and provide a refined microstructure while maintaining a high level of ductility. The result is increased service life, reduced internal wear and a high level of fracture resistance in poorly lubricated and highly contaminated application conditions.

After using Upgraded SKF Explorer for over 15,000 hours - double the length of the existing time-based maintenance schedule - the mine was able to modify and extend its time-based preventive maintenance plan to a period of three years. This has resulted in maintenance parts cost avoidance savings of US$23,660 per machine, plus no production loss at a cost of over US$15,000 per hour.

Lyndell Fuller, General Manager, Haver & Tyler Grand Canyon, a partnership with WS Tyler, oversaw the installation of the F-Class screen, equipped with the prototype Upgraded SKF Explorer bearings, at the mine’s crusher plant in 2011. “The mine is very pleased with the support our partnership with SKF gave them in helping to solve this critical bearing and lubrication issue,” Fuller said.

“The F-Class vibrating screens featuring the Upgraded SKF Explorer bearings have been tested and are proven to offer nearly double the service life in poor lubrication conditions and twice the service life in contaminated conditions,” said Keith Meyers, global industry manager, mining mineral processing and cement, SKF. “The operation of the F-Class with Upgraded SKF Explorer bearings at the Arizona copper mine matches these results.”

The DB Ultimate range of distribution boards is built for compatibility with Siemens circuit...