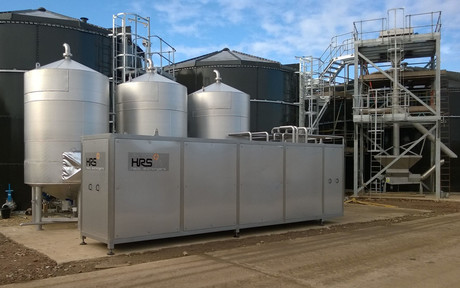 Muntons is a major producer of malt products, best known in Australia for its range of home beer making kits. The company is also a leader in sustainable production; since 2016 it has operated a closed-loop system which turns liquid malt waste into a high-quality biofertiliser at its production plant in Suffolk, England.

The basis of the system is a $9.4 million, 499 kW on-site anaerobic digestion (AD) plant which generates 25% of the site’s electricity. Each year the plant turns 80,000 tonnes of liquid malt waste into quality organic digestate fertiliser, which is used by the company’s network of growers to produce some of the 250,000 tons of barley needed to make 180,000 tons of malt each year.

Muntons first became interested in AD after analysis showed that 60% of the carbon footprint of its supply chain came from the artificial fertiliser used by its barley growers. The company realised that if a proportion of the liquid waste it produces could be treated through AD, it could produce a high-quality organic biofertiliser for its farmers to use instead.

The new treatment also captured nutrients such as phosphate, which were previously lost when treated effluent was discharged to the river. The digestate product is high in organic matter and acts as a soil conditioner and improver. It can also be applied to land over a longer period of time than the liquid waste which was previously produced.

Muntons’ digestate is blended with low chemical oxygen demand (COD) effluent before being treated with dissolved air flotation (DAF) in Muntons’ existing activated sludge plant. This stabilises the digestate and removes further COD, nitrates and phosphorus prior to the effluent being discharged to local waterways. The remaining sludge is then pasteurised in a three-tank unit from HRS Heat Exchangers and used as biofertiliser.

The HRS system works so that while one tank is being filled, the second tank holds the sludge at 70°C at the same time as the third tank is being emptied (each process lasts one hour). Waste cooling water from the CHP engine is used to heat the sludge in corrugated tube-in-tube heat exchangers, which is more efficient than heating an entire tank of digestate.

HRS has also incorporated an energy recovery section into the process to make it even more efficient: energy is transferred from the hotter (pasteurised) sludge to the colder (unpasteurised) sludge, reducing energy consumption by up to 70% compared to conventional systems and using heat which would otherwise be wasted. It is able to run at a half flow rate, should the volume of digestate stock reduce, and the equipment’s monitoring features ensure that every batch of digestate can be traced back to the feedstock from which it was produced. 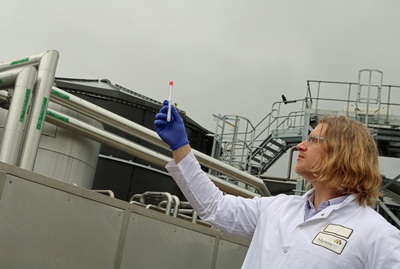 Once pasteurised, the biofertiliser can be de-watered if required and supplied for application either as a liquid for soil injection or a solid for muck spreading. Analysis by Muntons has shown that its biofertiliser is higher in nitrogen, potash and sulfur than most other available biosolids, as well as being a good source of phosphate and magnesium.

The system has so far treated almost 150,000 m3 (150 ML) of effluent, saving the company more than $5.95 million in electricity and waste disposal costs and reducing carbon emissions by 800 tonnes. The resulting material has been granted End of Waste Certification by the UK Environment Agency, meaning that it can be used as a biofertiliser.

“For Muntons this whole project has been about maximising efficiency,” said Matt Hale, International Sales and Marketing Director at HRS. “Although they have an abundance of heat, they still wanted to recapture what they could and our heat exchangers provide 40% heat regeneration. Our system also allows the tanks to run at half flow rates if necessary, meaning they can still carry on pasteurising without having to wait to build up a stock of digestate.

“Working with a company like Muntons to deliver a truly revolutionary waste treatment plant shows exactly what is possible in terms of implementing the circular economy. The results that the biofertiliser is providing in trials and in the field show just what a valuable resource it is.”

The CP20.248 power supply features an integrated real-time condition display that informs about...

The WAGO Gelbox is designed to protect WAGO splicing connectors from moisture and humidity, and...

NSW regulator responds to investigation into conduct of inspectors

Meet the brewer that never brews the same beer twice

Wine industry event to be hosted online in October

Manufacturing in the new normal