In April 2009, KSB Aktiengesellschaft, Germany, booked an order for four large water pumps to be supplied to a new pumping station in Western Australia. 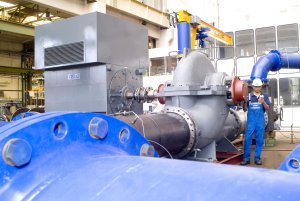 The drive rating of each pump unit is 2400 kW. They will be used to feed a storage reservoir with up to 265 million litres of drinking water a day via a pipeline from a desalination plant that still has to be built.

The German pump manufacturer received the order because of the high efficiencies its products are known for, and because they were able to present several references involving the same pump type successfully deployed elsewhere in Australia as part of earlier projects.

The Water Corporation is one of Australia’s largest water supply companies. It fills the water needs of the approximately 2.5 million inhabitants of Western Australia, an area measuring 2.5 square kilometres.

The pumping station situated in Binningup, around 150 km south of Perth, is designed to secure the supply of water in an extremely dry part of Australia.

Energy chains vs motor cable drums: which are better?

Both the motorised cable drum and the energy chain have advantages and disadvantages, depending...

Signal conditioning: getting the most for your money

The importance of taking care in selecting a signal conditioner cannot be understated — a...

Motor independence: what's in it for you?

Each motor type has its advantages and drawbacks, so it is important to comparatively assess...