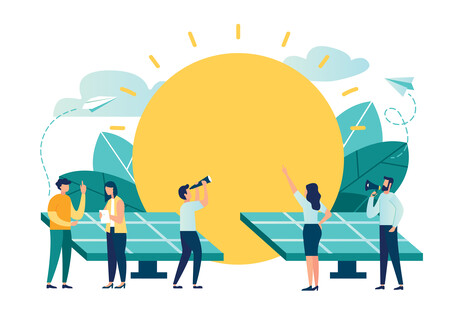 Microgrids have been around for a long time in some form or another. The farmer that fired up his diesel generator in the early 20th century to keep his irrigation pumps and house lights working when the utility supply failed might not have recognised the term. Still, he was setting up what is now the definition of a microgrid: a group of locally interconnected loads and an energy source that can operate independently of the national grid.

Marketers have had fun with the nomenclature as usual, with macro- used for the main grid, milli- for larger installations or collections of independent grids, micro- and even nano-grids that might be no more than a backpack-mounted solar panel topping up your mobile phone on a hike.

The microgrid is the area of intense interest today, typically powering an installation such as a farm, remote factory, hospital, or military site. With a global market projected to be around US$47.4 billion in 2025 at a compound annual growth rate of more than 10%, a microgrid can be fully independent or islanded, a backup for the main grid on failure or even a contributor to the main grid when locally-sourced energy is in excess of local needs.

The drivers for the use of microgrids are power for remote locations where no utility infrastructure is present, resilience against main grid failure, and flexibility to use local renewable energy sources such as hydro, solar, wind, ground-sourced, and combined heat and power (CHP), for a smaller environmental impact and reduced costs. Security is also a growing concern, especially for critical installations such as data centres, hospitals, and military bases where cyberattacks on the main utility supply are real possibilities. Here, we’ll review types of microgrids and power-conversion arrangements and the benefits of each.

A ‘smart’ microgrid is key to effectiveness

A domestic microgrid arrangement might look like Figure 1, with fixed solar panels replacing or contributing to utility power via an inverter, synchronised to the main grid. A high-capacity lithium-ion or lithium-iron-phosphate battery might be kept charged and available to provide power after dark or backup if the mains power fails. Alongside typical household loads such as lighting, heating, and kitchen/utility equipment, electric vehicle recharging is increasingly in the mix. It should ideally be from a local renewable energy source such as solar, to retain its green credentials. Smart control, personalising the microgrid installation, squeezes the maximum efficiency from solar panels while scheduling loads for minimum impact. Excess energy can be automatically returned to the main grid, either from the solar panels or even from the EV battery, for utility load balancing in return for monetary credit. 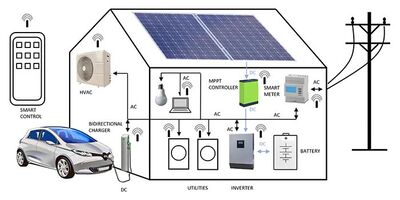 A factory would have a more complex microgrid arrangement, perhaps with multiple energy sources. The cost-benefit analysis for a factory environment is more complex than for a domestic situation; lost production during a blackout is a real cost and extra productivity, and lower energy costs from a smart environment are real benefits.

In such an environment, various renewable energy sources such as wind and solar can be coupled with traditional generator sets to provide complete independence in electrical power and heating when demanded, all under intelligent control with wireless communication. The system can integrate with the Industry 4.0 or Industrial Internet of Things (IIoT) concept. This combines physical production and operations with smart digital technology, machine learning, and big data to create a more holistic and better-connected ecosystem for companies that focus on manufacturing and supply chain management. Careful consideration must be given both in domestic and industrial applications to the architecture of the microgrid, not just for functionality but also for electrical efficiency, to achieve the hoped-for energy savings.

Even in the relatively simple domestic installation of Figure 1, electronic power conversion has multiple stages: The solar panels’ DC output must be converted to the storage battery voltage using an intelligent DC-DC converter with Maximum Power Point Tracking (MPPT) to extract maximum energy. An inverter transforms the battery DC to AC line voltage, a battery charger ensures that the battery is maintained at full capacity when there is no solar input, and a bidirectional converter charges the EV battery from AC but transfers power in reverse, typically at night. Other possible power sources have their own power conversion requirement — such as a wind turbine with an induction generator that outputs variable frequency and amplitude AC, which must be converted into utility-compatible levels. In an industrial environment, of course, complexity is much higher.

All these power conversion stages lose some energy as heat, which represents money lost and longer payback times, so efficiency is a major concern. In some situations, heat can be recovered, perhaps for community use. Still, the opportunities are limited, so it is more likely that even more energy and the cost are expended in cooling systems to extract the heat and avoid stress on the power conversion electronics.

The various power conversion stages in a microgrid all use switched-mode techniques: semiconductor switches chop the input DC or rectified AC voltage at high frequency, followed by a relatively small transformer to scale the voltage, then conversion back to DC through rectifiers, or to AC through filters. Regulation of outputs to a constant DC or 50/60Hz AC is achieved by pulse-width modulation (PWM) of the semiconductor switching action.

At higher powers, choice of semiconductor switch has been limited until recently to insulated-gate bipolar transistors (IGBTs), which must be switched relatively slowly for acceptable efficiency: IGBTs dissipate no power when they are off and have some conduction loss when on, but as they transition between the two states, they can take transient power which can be measured in kilowatts (Figure 2). The more transitions per second (frequency), the higher the dissipation. For this reason, switching frequencies have been a few tens of kHz at most, and this has implications down the line; transformers and other magnetic components such as filters have to be large and are consequently costly. 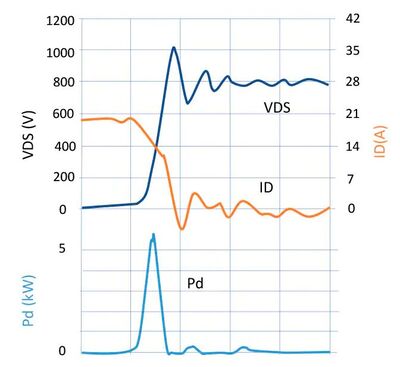 Increasing switching frequency has been a design goal for power converter designers for the size and cost savings that follow, so other semiconductor devices have been considered that show lower switching losses, with MOSFETs, the main contender. However, these devices have limited power ratings, and conduction losses can be higher than IGBTs. MOSFETs typically exhibit an on-resistance that dissipates power with the square of the current value, while IGBTs exhibit a relatively constant voltage drop, so dissipation is approximately proportional to current. Therefore, at high currents, MOSFETs can be lossy, and the benefits of higher frequency operation negated when the energy lost and the larger, costlier cooling needed is factored-in.

A new generation of switches, wide band-gap (WBG) semiconductors, have become available, showing a step improvement in switching speed without compromising efficiency. The devices, fabricated in silicon carbide (SiC) and gallium nitride (GaN), can switch so fast compared with traditional silicon that any transient dissipation is minimal. Combined with very low on-resistances and inherent high-temperature capability, equipment designed with WBG technology is smaller and more efficient, not just because of the devices themselves but also because the higher switching frequency enables smaller associated components such as transformers and filters. This all reads directly across to low acquisition and running costs, quick payback, and a smaller environmental footprint. Companies such as CREE, GaN Systems, UnitedSiC, Transphorm, and many others are active in the WBG semiconductor field with devices available from Mouser Electronics.

Microgrids have the benefits of independence, resilience, security, and ability to maximise local renewables. Microgrids can power an installation such as a farm, remote factory, hospital, or military site. Their versatility and continued development are reasons for the microgrid industry’s growth to reach around US$47.4 billion by 2025.

*Paul Lee is the author of over 200 articles and blogs on power subjects as well as a book on power supply design techniques, Power Supplies Explained. As a chartered engineer and with a degree in electronics, Lee has owned a power supply manufacturing company and later worked as a Director of Engineering for Murata Power Solutions. Currently he is a freelance writer and manages the European Power Supplies Manufacturers' Association. Lee lives in Oxfordshire UK, is an associate of the Royal Photographic society and holds an amateur radio license.

Pacific Automation are a trusted technical supplier of premium products for industrial...

How ON Semiconductor plays a vital role in supplying medical ventilators.

RS e-Commerce Solutions are designed to make ordering easier and cater for all business sizes,...

Is it time to revise the approach to lactose in dairy?